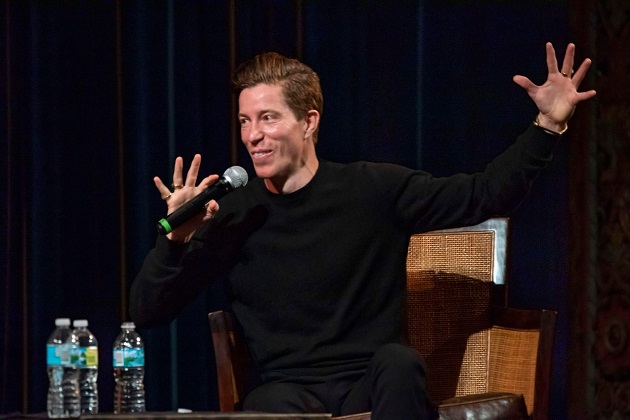 On Thursday, I got the incredible opportunity to listen to Shaun White talk about the ups and downs of building the sport of snowboarding! Besides being every little girl's heartthrob in the 2000s, Shaun White has had and continues to have the most incredible career. Getting his first sponsorship, and going pro at age 13, Shaun had to deal with a lot do different aspects of pressure, coming from all angles of the industry. White speaks about the strength it took to stay true to himself, and how that strength pushed his career forward. He was pressured to ride without his helmet at the beginning of his career. He was also surrounded by partying and alcohol from a very young age. Shaun also stood up to the media by refusing to do tricks during interviews. He wanted to be a professional face for the sport of snowboarding, which was in the beginnings of its popularity. Strength, having fun and staying true to yourself are aspects that Shaun portrayed kept him on the right path, and has helped him progress to where he is at today (with of course the love/support of his family and friends). And just the answer to the question I'm sure everyone wants to know, "How does it feel to hold a gold medal?": "It's that dream, that reoccurring dream that you're scared to have, but you want to let in. There's so much in between you and that dream... but in that moment, it's incredible. I can't even describe it."
Come out and listen to the inspiration, wisdom, and tricks of these other influential speakers in the Limelight series at Tampa Theatre. For more Tampa events, check your local guide to everything Tampa at 813area.com!
Cover photo courtesy of Tampa Theatre Facebook page

Dr. Mae C. Jemison leads 100 Year Starship (100YSS), a bold, far-reaching nonprofit initiative to assure the capabilities exist for human travel beyond our solar system to another star within the next 100 years.

Academy Award winner Geena Davis is one of Hollywood’s most respected actors, appearing in several roles that became cultural landmarks. Join us as she speaks at Tampa Theatre.

Jonathan Haidt is a social psychologist who is widely considered to be one of the world’s leading experts on the psychology of morality. His early research radically transformed the field, pulling it away from its earlier focus on moral reasoning.