MOSI Reopens with A Remodeled Building, Direction and Focus Under New CEO

With over thirty years of business leadership experience and a knack for making companies lucrative, Julian Mackenzie has been the perfect fit to get the Museum of Science and Technology: MOSI financially solvent and moving in a forward direction. Mackenzie became CFO in October of 2016 and later President and CEO in July of this year. He and his staff remained busy with the remodeling and reconstruction of the museum for the last three months since temporarily closing in August. MOSI will reopen Saturday with a new look and lower prices.

Likely the biggest change visitors will see on Saturday will be the reduced footprint of the museum. It will be smaller occupying only the Kids in Charge building. The 3-story, 36 obstacle Sky Trail Ropes Course is reopening, but without the zip line. The expense of running the IMAX theatre also forced it to close. It’s a new MOSI, offering a concentrated experience showcasing the technology of the future. Exhibits have been relocated to the new building and most have been remodeled too.

Reduced pricing will reflect these building changes and guests can enjoy admission prices of $12.95 for adults, $7.95 for children 3-11 and seniors 60+ and military for $10.95. Children under two are free and State of Florida teachers can sign up for a free MOSI pass.

Mackenzie led turnaround plans for other companies and possesses a unique talent for rebranding and restructuring. His biggest efforts will focus on getting MOSI staffers into the 486 Hillsborough, Pinellas and Pasco County Schools with outreach programs. Bringing curriculum into the schools and teaching hands-on in the classroom.

By developing our outreach programs, we aim to assist the teachers in providing them engaging science programs and hope to reverse the trend of 50% of the students losing interest in science by the time they reach 8th grade. Julian Mackenzie 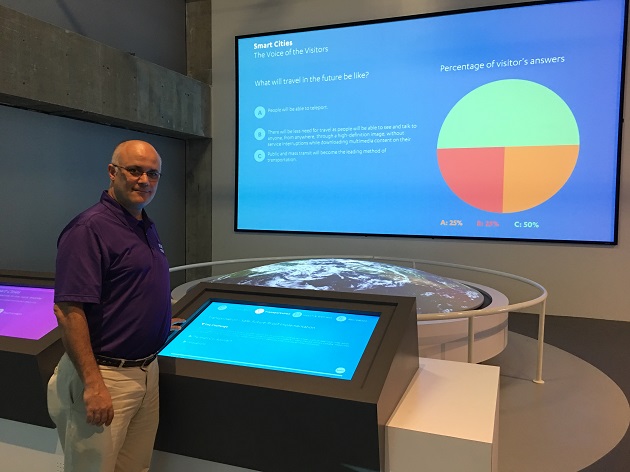 Ultimately the museum will be moving to the Waterside District downtown but that is four to five years away. For now, MOSI has been focused on listening to guest and staff feedback and using consultants to maneuver the transition of the museum in a new direction. They will have one more re-grand opening before their ultimate move to Downtown Tampa.

Mackenzie isn’t new to Florida but it’s only his second U.S. city after previously residing in Orlando. He’s originally from Switzerland and his wife Deborah is from Italy. He speaks French, Italian, Portuguese and English. At home, the family speaks whichever language best expresses their feelings at the time and it’s not unusual for them to vacillate between languages in a singular conversation. He and his wife typically speak Italian if it’s just the two of them. Mackenzie says, "Siamo fieri di come I nostril figli si sono adattati alla vita negli Stati Uniti," which translates to we are proud of how our children have adapted to live in the U.S.

Mackenzie and his wife have three children, ages 22, 18 and 15 and when he’s not busy with work he enjoys sailing. He had the opportunity to sail a 40’ boat for almost eight months and it’s something he likes to reflect on during busy museum days.

If you’d like to follow Events and Things to Do in Tampa Bay, register with us on 813area and 727area. Registration is always free and it’s a great way to connect to all things in our area!   All photos credit to MOSI Facebook Photos