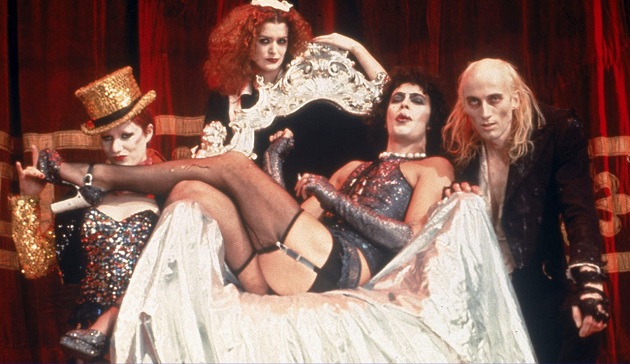 The Rocky Horror phenomenon makes its triumphant return to Ybor City, just in time to get us doing what everyone should do in September - start thinking about Halloween!

Join a diverse and fun-loving crowd of freaks, weirdoes, and costumed characters on the last Saturday of every month as we celebrate the ancient rites of Rocky Horror. Heckle the hapless Brad and Janet, marvel at the timeless and androgynous sexiness of young Tim Curry, sing your guts out to "There's a Light," and prepare to do the Time Warp (can you tell I'm a fan?). And of course, no viewing of The Rocky Horror Picture Show is complete without fishnets, corsets, and more courageously-done makeup jobs than you can shake a stick at.

Unless you've lived on Mars for the past 42 years, you're probably aware that a huge subculture grew up around this odd little movie starring a sexy young Susan Sarandon and the above mentioned Tim Curry as a cross-dressing mad scientist, Dr. Frank N. Furter. The Rocky Horror Show actually got its start back in 1973, opening June 19th at London's Royal Court Theatre, and won Britain's prestigious Evening Standard Theatre Award the same year. The Rocky Horror Show ran briefly on Broadway in 1975, earning a Tony nomination, and the movie adaptation was released in August of 1975. Interestingly, the main characters Brad and Janet are listening to Nixon's resignation speech on the car radio before the fateful flat tire that leads them to Dr. Frank N. Furter's party castle - Nixon resigned on August 8th, 1974. In 2005, The Rocky Horror Picture Show was added to the National Film Registry by the Library of Congress for being "culturally significant."

This monthly Rocky Horror mayhem will be at the AMC Classic at Centro Ybor, and the enthusiastic Hell on Heels Live Cast will be your spiritual advisors for your Rocky Horror journey. Hell on Heels is a wildly sexy and talented group of performers whose love and dedication to the Rocky Horror lifestyle is sure to please. Be prepared for hilarious (and rude) jokes to start right from the moment the lights dim. And don't forget to wear your dancing shoes - shaking your booty and doing the pelvic thrust that really drives you insa-ay-ay-ane during the Time Warp are a vital part of the Rocky experience.

The fun begins promptly at 11 pm with the traditional "virgin" ceremony and a round of boisterous, definitely NSFW ice breaking pre-show hilarity. The movie itself starts at 11:30 pm sharp and tickets are only $8.00 - so get your butt down to AMC Classic at Centro Ybor THIS SATURDAY and the last Saturday of every month for classic RHPS shenanigans!

Stay connected to everything local in Tampa Bay, Things to Do, Events, Restaurants, Sports and more! Subscribe to 813area.com and 727area.com - it's FREE!