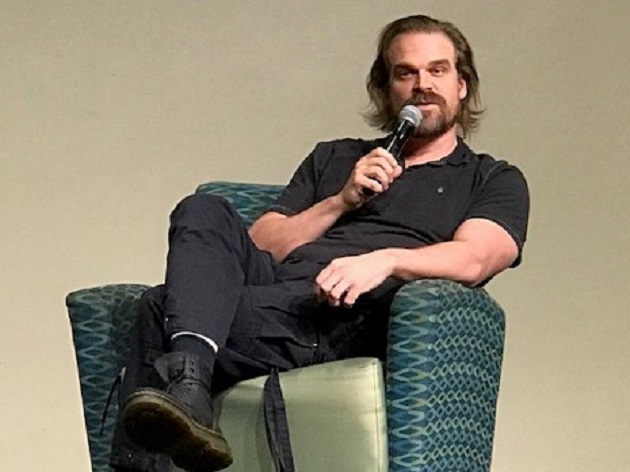 “It might never get finished”, he joked to the audience at the University of South Florida, but actor David Harbour said he is writing a book that is part memoir and reveals details about his time in a mental institution and his struggle with bipolar disorder.

Harbour was in Tampa as part of the University Lecture Series at USF, a student-supported program that brings in national speakers to address the student body. Past speakers have included Archbishop Desmond Tutu, the Reverend Jesse Jackson, and actress Viola Davis.

Harbour was well-received with roaring claps and cheers to an audience of 806 people in the Marshall Center on November 20, the last speaker for the ULS series this year. He was funny and self-deprecating weaving stories about his years as a struggling actor, before finding success in the popular Netflix series, Stranger Things. Harbour told the audience he gained 20 pounds to play Jim Hopper, but said, “no one told me to”.

After graduating from Dartmouth, Harbour landed in New York City, where he found years of not knowing if he could pay the rent. He equated finding your way in life after college to learning a new language. He said he was ill-prepared for the constant rejection. At 32 he was making $25,000 a year eating boxes of spaghetti for a couple of dollars. “I had to learn a lot, in a lot of different ways,” he said. He often thought of quitting acting but soon after, the success of Stranger Things followed.

Harbour loved the character Jim Hopper immediately and during the pilot thought it was the best character ever, although he did not think Stranger Things would be successful initially. He credits The Duffer brothers and their vision saying, “Jim Hooper is one of the great leading men from the 70s and 80s,” like Gene Hackman or Nick Nolte.

A mental health care advocate, Harbour was candid about his mental health journey, believing that we're all broken, in one way or another. When asked how fame had changed his life, Harbour told the story of his local coffee shop where would visit daily for his favorite cup, an Americano. As soon as Stranger Things fame rose, everyone treated him differently. He says he had to convince them, “It’s still me”!

Harbour recently hosted Saturday Night Live, which had been a life-long dream for the actor. He described in detail his week filming and said it was a surreal experience. He encouraged students to embrace themselves and all their weirdness and often what you're most embarrassed about, is what others find the most loveable.

USF Student Program Coordinator for the ULS series, Isabelle Arroyo-Acevedo, says, "The University Lecture Series is a program that looks to bring speakers that develop students intellectually. We try to ensure as best as possible that the speakers that are brought will address current topics, interests and even challenges that college students face on a daily basis, while also ensuring that they charismatic, authentic and relatable."

The University Lecture Series resumes in January 2020. For more event and entertainment news in Tampa, connect with 813area, we’re your free guide to things to do in Tampa Bay!

Cover photo courtesy of the author