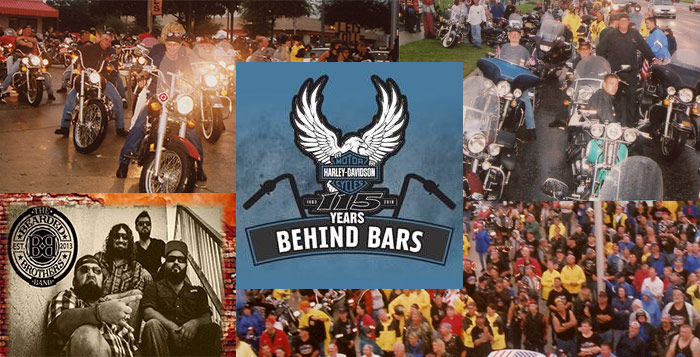 America's oldest and most beloved motorcycle manufacturer, Harley-Davidson is celebrating 115 years of freedom this month, and many dealerships across the country are revving up with festivities of their own.

On August 24 and 25, Harley-Davidson of Brandon will be hosting their Harley-Davidson 115th Anniversary Celebration, the Tampa Bay area's exclusive opportunity to celebrate Harleys and riding with like-minded enthusiasts.

With this year's theme of "Guilty... 115 Years Behind Bars," this two-day festival open to the public is going to the ultimate blowout with a slew of activities, events, refreshments, and vendors geared toward true Harley lovers.

The Harley-Davidson 115th Anniversary Celebration begins on Friday, August 24 with their Official Ride Home Party & Overnight Stop Celebration from 5 p.m. to 10 p.m. at Harley-Davidson of Brandon. Attendees can enjoy a number of activities like the Harley-Davidson Jump Start motorcycle riding simulator, a mechanical bull, a dunk tank, live music, and a social media lounge as well as lots of bike-related vendors, food trucks, and refreshing drinks.

There will also be complimentary bikini bike washes and Harley girls walking around. If that doesn't get your heart racing, Harley-Davidson of Brandon is also giving you the opportunity to win a new K-5 motorcycle!

Major events of the night include:

After a night of fun, The Harley-Davidson 115th Anniversary Celebration continues on Saturday, August 25th with their Official Riders Send-Off from 8 a.m. to 11 a.m. at Harley-Davidson of Brandon. The festivities begin bright and early with a free pancake breakfast for all riders and guests at 8 a.m. followed by the Blessing of the Bikes Ceremony at 9:30 a.m.

Shortly after at 10 a.m., a special escort will depart to lead the riders on their way to their next destination on The Ride Home; anybody can join to wish the riders well during the official send-off. There will also be goodies bags for all the riders, but make sure to get to the send-off early because supplies are limited, and bags are first-come-first-serve.

For more events in Tampa like The Harley-Davidson 115th Anniversary Celebration, register on 813area and connect to everything going on in Tampa Bay.