Excitement. Energy. Excellence. Those three words only begin to tell the story that over 40,000 pumped-up fans will begin to experience on February 15th, 2020, when Raymond James Stadium hosts the Monster Energy AMA Supercross, with the best riders in their sport flying 30 feet in the air on 225-pound motorcycles and covering distances up to 90 feet. Sound like fun?

"I started when I was 6", said veteran racer and Clearwater native Kyle Chisholm.  "It was just so fun. Like riding a bicycle on steroids." Growing up in Seminole, Chisholm attended Supercross races as a fan with his father at the old Tampa Stadium in 1998 and at Raymond James Stadium in 1999 and turned pro at the age of 16 while being homeschooled. The Monster Energy Supercross was held in Tampa two years ago and Chisholm competed in that event. But he's well aware of how unique it is to be back home, especially now that he's a father of two.  "It's really special because most of my family still lives here," said Chisholm.  "At the same time, the stress level is higher because I'm pulled in so many different directions for tickets, etc. But it's great because I still have a passion, I'm a competitive person and I LOVE the feeling you get riding a dirt bike."

The Tampa event is the 7th of 17 races on the circuit, which is held in 13 cities across the United States, culminating with October's season-ending $1 Million All-Star Race in Las Vegas. There is another large local tie-in, because the series is presented by Palmetto-based Feld Entertainment. "We absolutely love having the race in Tampa," said Feld Entertainment's Sean Brennan.  "On a personal level, we travel with these guys from January to May, so it's good to be close to family. This is one of the best-kept secrets in Florida for Feld to be able to showcase this part of motorsports."

All of the races are held in either NFL or Major League Baseball stadiums, with an average attendance of around 50,000 people. So as you might imagine, there's a massive amount of work involved, such as the 6,800 sheets of plywood placed over the grass for protection, not to mention the 26 million pounds of dirt used to create a typical track, which is equivalent to 77,000  wheelbarrow loads. "It's a 3-day operation to build," said Tim Phend, the Director of Operations for Monster Energy Supercross.  "We unload the trucks on Tuesday, build the structures on Wednesday and put the finishing touches on Thursday. It'll take just 6 hours to tear it down and things will be totally cleared out by the following Tuesday.  It'll be like we were never here."

The qualifying and practice begin at 1:05 pm and heats for finals begin at 6:3 p.m. Tickets start at $15 and are on sale now.
Connect with 813area for more fun events in Tampa. It's your free guide for Tampa things to do. Best of all? It's free! 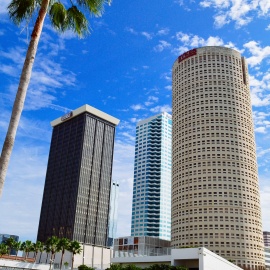 Things To Do in Tampa This Weekend | February 27th - March 1st