Enjoy Rounds of Rum Drinks Plus Sugar Ray, The Wailers at September’s Summer of Rum Festival 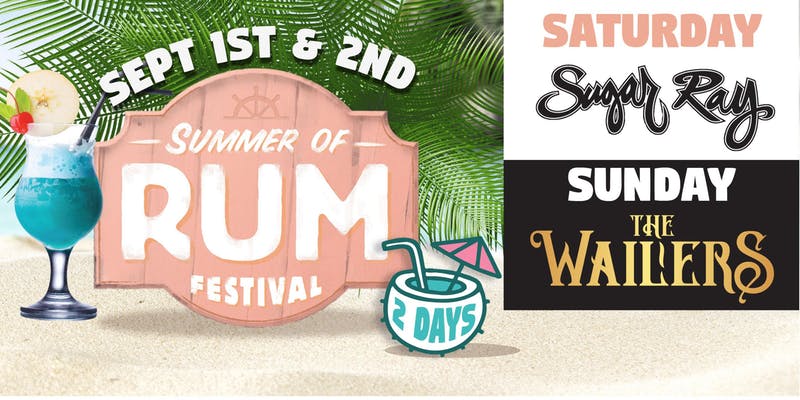 Tampa’s abiding affection for rum is once again on public display, not when rum-soaked crowds swarm the city during the annual Gasparilla pirate invasion and parade, but when the Summer of Rum Festival returns to downtown Tampa Sept. 1-2.

Attendees on that Saturday and Sunday of Labor Day weekend will witness an invasion of a different sort when rums from near and far are celebrated with a special tasting event and as expertly whipped up cocktails sold throughout Curtis Hixon Waterfront Park.

There will be all sorts of ways to sample the many varieties and versatility of this spirited beverage that can be enjoyed fruity, frozen, combined with mixers or poured into a punch.

While rum is by far the star of the event, there’s plenty happening all weekend.

Both days feature musical guests that include Saturday’s headliner, Sugar Ray, whose hits include “Every Morning” and “Someday.” The Wailers, a legendary reggae band, storm the stage on Sunday. Before their sets, enjoy the summery sounds of rock, pop, punk and reggae band Ballyhoo!, St. Petersburg-based UNRB, Tribal Style, a roots, rock and reggae band whose members are from Jamaica, Long Beach and the Tampa Bay area plus spins by DJ Cardinal, whose personal music library boasts more than five million songs, and DJ Fresh.

A separate ticket provides admission to Saturday’s Island Rum Tasting Party at The Vault, a nearby venue, where more than 40 rums imported from the Caribbean islands to rums from right here in the Tampa Bay area will be featured.

This event runs from 2 - 6 p.m. Everyone will enjoy sampling their choice of five tastes from an amazing selection of rums, including Carmelita’s Grilled Pineapple Rum, Timber Creek Apple Pie Rum, Alligator Bay Dark Rum and Gubba Silver Coconut Infused Rum. After you sip, slip away with a Summer of Rum shot glass as a keepsake. Tickets are $35 in advance and $40 starting Sept. 1.

Event planners announced a great addition to this year’s festivities - RFID-enabled wristbands that provide a quick, convenient and cashless way to purchase food, beer and merchandise. You can even connect multiple wristbands to a single credit card so that the big spender in your crew has it all covered.

And there’s more. A curated Caribbean market and fireworks!

So beat the drum and get raise a glass, or two, to the glories of rum!

Want to find other fun events coming up throughout Tampa Bay? Simply register at 813area or 727area. It's easy and free!