With the first ever Tampa Bay Beer Week kicking off on Saturday, March 3rd, it's only appropriate that we talk a little about craft beer before this long week ends.  The Tampa Bay area's craft beer scene has been expanding exponentially with microbreweries, craft beer bars, and more popping up throughout the area in the past few years.  To get a taste, there are a number of bars in Tampa offering a huge assortment of craft beers.  Here are some of our favorites.

Cigar City Brewing - Somehow Cigar Cigar has managed to be one of the newest, biggest, and most successful craft breweries in Tampa in its short existence.  Cigar City's tasting room is really more of a full-on bar and features a huge variety of beers brewed right on the premises including Jai Alai IPA, Maduro Brown Ale, Tocobaga Red Ale, and more.

World of Beer - With five locations throughout Tampa, World of Beer is the place to go for a huge, and we mean huge, selection of craft beer on tap and in bottles.  In total, each World of Beer location offers over 500 different beers with around 40 of them on tap as well as live entertainment and much more.

New World Brewery - The place to be for some of the best craft beers and live music in Tampa.  New World Brewery is a beer-lovers haven and features a huge assortment of domestic and imported craft beer, wood fired pizzas, and an outdoor patio perfect for kicking back and enjoying live music on many nights of the week. 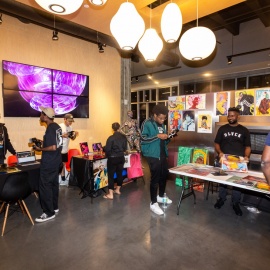