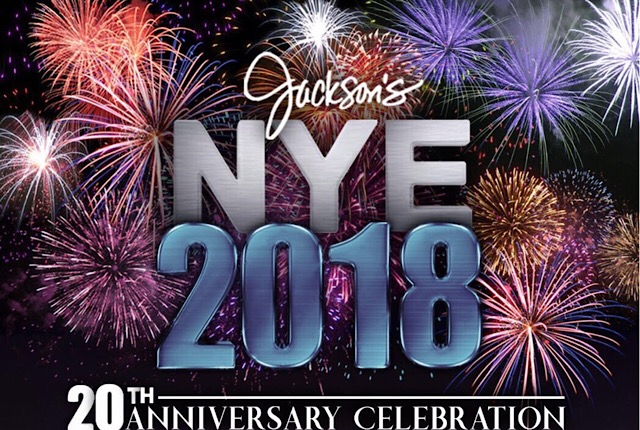 Jackson’s has been a major part of Harbour Island since it opened on December 7, 1997. Lucky for you, they waited until Sunday, December 31st to celebrate 20 years of serving the Tampa Bay area... then they combined it with the glitz and glamour of New Year’s Eve to throw their biggest party yet! Come celebrate the end of 2017 and the start of 2018 at Jackson’s New Year’s party by enjoying the best views to watch Tampa’s largest fireworks show over the water of Hillsborough Bay. At midnight, Jackson’s will hand out a complimentary champagne toast to guests while the balloons drop from the ceiling... all while the area’s hottest DJs spin your favorite hits from 2017. The fun kicks off at 9 p.m., and you don’t have to rush out the minute the ball drops — the party continues all the way until 3 a.m. the next morning.

If you want to bring in 2018 in style, spring for an all-inclusive VIP Plus admission. This option includes an open bar and hors d’oeuvres while you dance the night away in Jackson’s signature Waterfront Room.

The only way to get into Jackson’s New Year’s Eve party is with a ticket, and they’re going fast. If you’re bringing the squad, VIP booths and hightop tables are already sold out, while VIP cabanas are moving quickly. So if you want to be part of this special night, the time to act is now!

Tickets are $60 for general admission, $100 for VIP, and $175 for the all-inclusive VIP Plus ticket with open bar and hors d’oeuvres. The Jackson’s Bistro NYE 2018 Celebration is for revelers 21 and up, and you will need a valid ID or passport to get in the building. Make sure to dress to impress, and leave the bad attitudes and bad vibes back in the year 2017.

For more information on this anniversary party and New Year’s Eve blowout, call (813) 812-4950 or check out Jackson’s Facebook page.

For Tampa’s best parties and events during New Year's Eve and all throughout the year, plus all the best places to eat and drink in Tampa, register with 813area. We'll send you updates to your mobile device... and it’s free!