Wine, Martinis, Jazz and Fine Art, The Refinement of Ybor?

As the improving economy breathes new life back into Tampa Bay, it appears to be bringing not so subtle change to Ybor City. Buffalo Wild Wings and 7-Eleven chain brands along Seventh Avenue are obvious signs things are changing along 7th Avenue. Not so obvious are the other businesses that are bringing a slightly older, more mainstream crowd to Ybor.

Nightlife, dining and entertainment sustained the bricks and mortar that were the “Main Street” Ybor business district of yesteryear.  Ybor’s urban landscape traversed the recent past with small, independent eatery, drinkery and eclectic merchandise entrepreneurs filling the spaces vacated by previous hardware, jewelry, furniture  and mercantile merchants.  Subcultures flourished and street parties were the fare.

Unfortunately, suburbanites, tourists and mainstream money avoided the area, only to revel in the random crime reports on the 11:00 news. Things are now a’changing. The urban development that was stifled with the economy after 2007 is coming back to Ybor.

Guavaween, Ybor’s notorious halloween street festival, has gone back to it’s roots at the Cuban Club.

Even growth of the nearby Channel District with Maloney’s, The Hideaway and an explosion of urban population have helped fuel the changes in Ybor.

Add to this the existing dining establishments like The Columbia, Samurai Blue, Bernini, Stone Soup Company, The Bricks, Gaspar’s and Carne, just to mention a few, and this begins to outrival the variety of Tampa’s International Plaza or other suburban centers.

While we are not likely to see an Apple Store in Tampa with a 7th Avenue address, change is afoot in Ybor.

Russell   6 years ago
Apple might not be joining Ybor City but you should not forget the Segway Tours by Electric Glide Tours (located in Centro Ybor). A very fun way to see Ybor City. 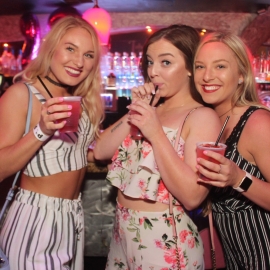