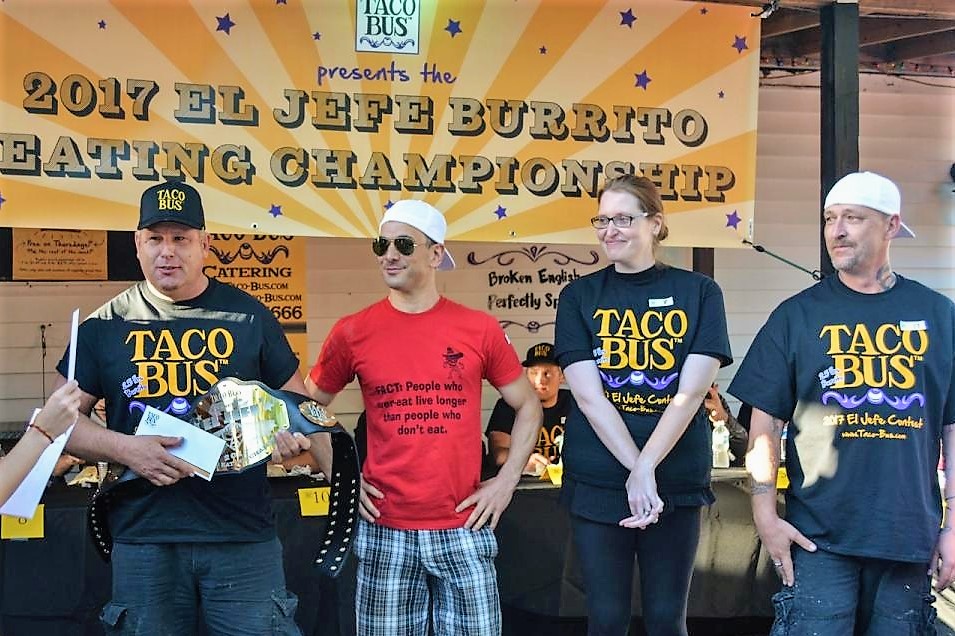 Competitive eater Michael Jenkins established a new Taco Bus tradition by taking the win in the First Annual El Jefe Burrito Eating Championship held last night during National Burrito Day at the Hillsborough Ave Taco Bus in Tampa. Among those ready to bolt down the epic 2.5 pound El Jefe Burrito were men and women ranging from professional competitive eaters to newbies joining for the fun. From diminutive dad Cory in a gray T-shirt and jeans with his wife and kids providing support, to crowd favorite Noah who rumor had it qualified by downing his qualifying burrito in 1:47 secs, you could feel an excitement in the air as friends, families and onlookers prepared to witness history.

Walking up to the original Taco Bus on Hillsborough just east of Nebraska I encountered 'El Jefe Luchador' as he took photos with the crowd. Joining him before the green screen was creator of the notorious El Jefe burrito, Chef René Valenzuela mugging for the camera. 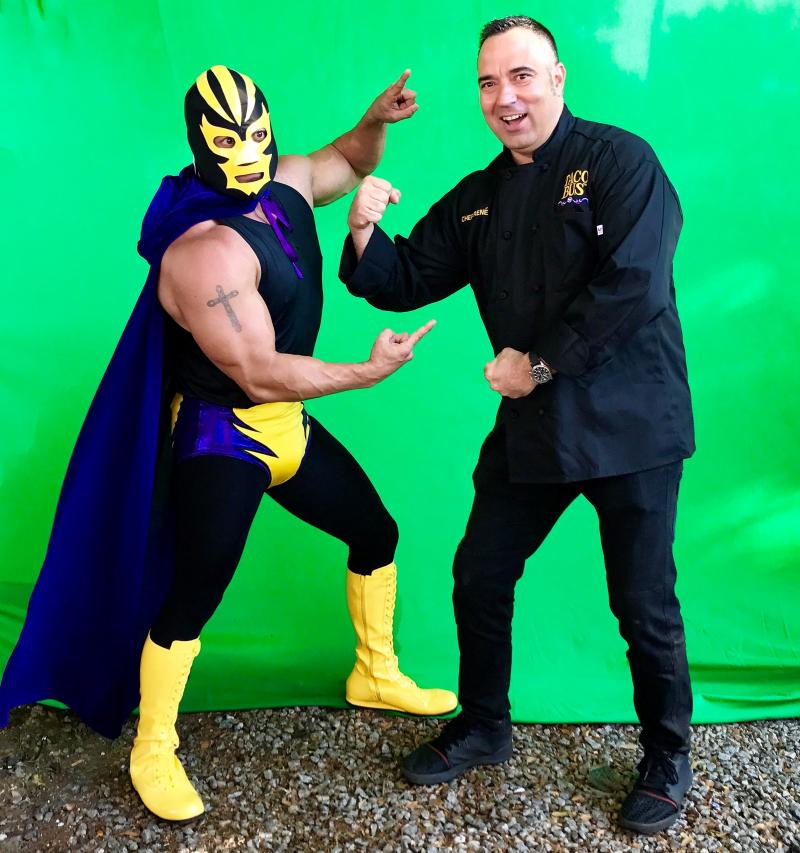 Contestants included Michael A. a regular at the Hillsborough location. Encouraged to qualify by a friend, a common theme for many of the newbies, he did not qualify at first.  Qualifying requires contestants to finish an El Jefe in less than 15 minutes at any Taco Bus location.  Taco Bus franchiser Omar Chaudry stated, "Of the thirty qualifying contestants twenty were chosen to compete based on best times." Mike A. did not give up, eventually making the cut at 6:24 he was visibly excited to be competing. Mike confided he practiced leading up to the competition, sharing his best time at 3 minutes. Working nights as an independent paper carrier Mike prepared for the competition saying, "I slept all day so I wouldn't eat."  A Taco Bus regular Mike tells us he, "returns for the cross-cultural blend of flavors", and he loves the slogan, "Broken English Spoken Fluently".

WTSP's Noah, a thirteen-time competitive eating champion, turned out to be the rumored 1:47 qualifier. Standing fit and muscled in a skin tight red running shirt, a ball cap and wearing a shiny gold belt won in another contest Noah confided he prepped by distance running saying, "I'm ready to carb load, I'm hungry!"  I watched Noah when the competition began, hidden behind a jumbo drink cup it's difficult for fellow contestants to see how quickly he consumes food. The El Jefe was the first ever burrito competition for competitive eater Noah. 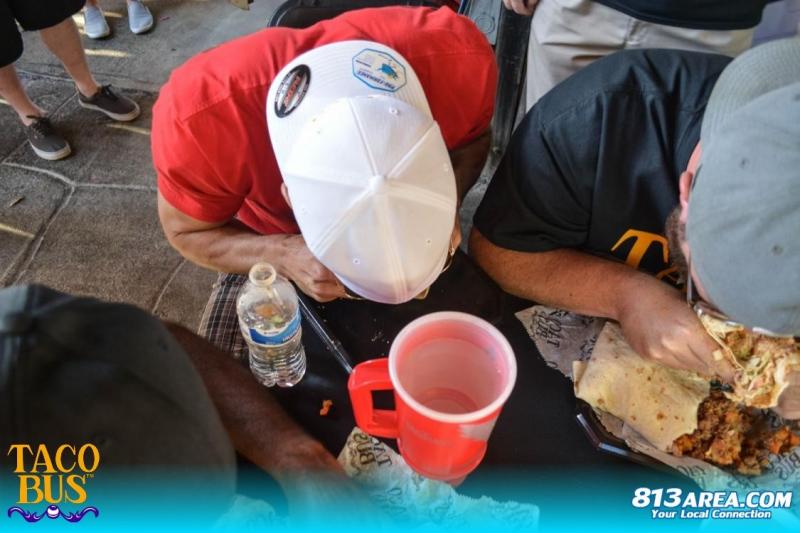 Female contender Janice qualified at 7:55.  She, "hit a wall' during her qualifier, describing herself as, "shaking like a leaf', she didn't quit resulting in Janice making the top twenty!  Also entering at the recommendation of friend-in-attendance Nichole, Janice practiced by chowing down four El Jefes during the week. When I met her she appeared slightly nervous but excited to have the chance to win not only the belt but first prize money totaling $250.

Cory, my favorite contestant, qualified in 11:47. At the championship match with his adorable wife and young children, this bespectacled dad entered the contest after friends at work began joking about the event. Thinking, "I'll give it a try!", as a swimmer, he trained by swimming to build his appetite. Admittingly not a big guy his best practice time took him down to 8 minutes. When asked why he decided to give it a try he replied, "Tonight gives us a chance to come out as a family to celebrate and have fun, win or lose it's all good stuff."

In the crowd, I met Joshua, not there in support of a contestant Josh read about the contest online and made plans to come out for the fun and a good meal. Telling me he likes 'quirky things', the El Jefe Burrito Championship was something Joshua did not want to miss!

In front of a sizeable crowd, contestants gathered at a Last-Supper-ish table awaiting the procession of El Jefes making their way from the kitchen. Fully wrapped in paper 20 gut-busting burritos on plates hit the table as the rules were read. Typical of most competition eating events referees made it clear, no 'Chipmunking' (you must swallow all the food in your mouth to win) and clean up any 'debris' left behind on your plate. No 'dunking' was allowed, but water bottles were provided and if you got sick during or following the contest you would be disqualified. As the main judge began the countdown, dad Cory stopped the proceedings to ask for a fork causing the crowd to giggle. MC, Eric Seidel joked about never meeting a, "fancier group of Mexican food eaters", as others asked for utensils. The atmosphere was one of anticipation and motivation as everyone settled in for an unforgettable battle of the burrito!

With the crowd cheering on friends and loved ones it ended quickly as first ever El Jeffe Champion Michael Jenkins took the belt in 2:22. Noah Pransky came in second at 2:32 admitting to the crowd he was 'embarrassed' to lose. Third place went to female contestant Meredith Marsh, with a time of 3:44. Meredith beat out fourth place Mike Ryan who clocked a 3:48 with Alfonso Perez coming in fifth with a time of 4:03. First place took home $250 cash, second $100, third $50 and fourth and fifth $25 each along with other Taco Bus swag and bragging rights for having competed and won!

Winner Michael Jenkins, behind a disarmingly cute smile, is a seriously committed competitive eater.  Choosing not to share the number of wins in his past, his strategy was to not eat anything the day before and a desire to as he put it, "destroy that thing".  Beating out Noah by mere seconds, Michael proudly smiled as he posed with El Jefe wearing his Championship belt. I caught up with Meredith, third place winner and the only female to place; she was all smiles as I asked her thoughts following the adventure.  A newbie, this was Meredith's first-ever eating challenge. I watched after she secured third place while the remaining contestants continued to compete.  Beads of sweat popping out on her forehead on a cool and breezy night I kept watching. As her face reddened I could see concern bubbling below the surface. A strong competitor, she managed to pull through telling me afterward, "I thought I was going to lose it and disqualify myself by getting sick, but I choked the feeling back and am fine, I just want to go home now and nap!' 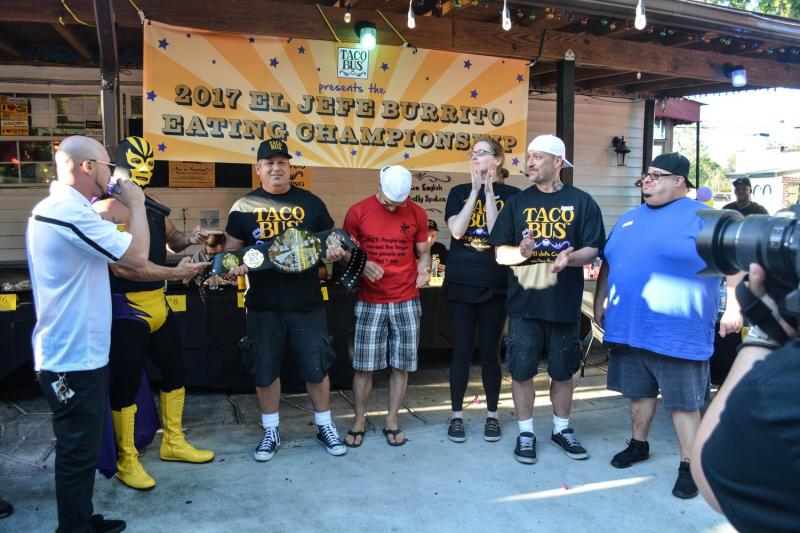 The competitors themselves epitomized the general Tampa population from clean-cut dads to college students, fun-loving foodies, hippies, big bearded dudes, bicycling, running and swimming athletes to the Mexican street food loving regulars, they were all represented, so what was the common denominator? They are all folks who do not quit! One contestant, though not required, chose to finish his El Jefe after the competition ended.  To thunderous applause, he licked his fingers when done, leaned back looking satisfied and slowly smiled.

We look forward to watching Jenkins defend his Taco Bus El Jefe Championship belt next year and to the opening of many more Taco Bus locations in our area! We expect the El Jefe competition to grow as word spreads about this rousing contest as it continues to challenge and inspire locals to compete!

(All photos by 813area Event Photographers, contact us to cover your event!)

Dock and Rock at Ricks on the River in Tampa