An In-depth Look Inside The Newly Opened Hall on Franklin 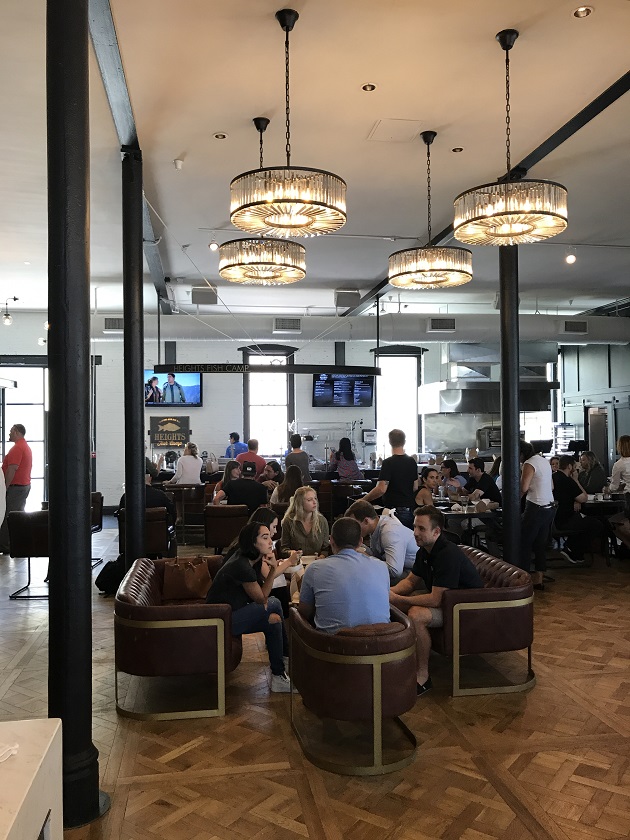 Tucked within the streets of Tampa Heights, a collaboration of seven culinary experiences encompass “The Hall” on Franklin. The new shops available for business as you walk into the open space building are Poke Rose, Bake'n Babes, North Star Eatery, Heights Fish Camp, Ko-fē, The Collection, and The Heights Melt Shoppe. The eclectic mix of food and drink shops reach each corner of The Hall, a unique concept that hasn’t reached Tampa before. What you need to do to experience this? Come and sit, and the wait staff will come to you with a menu that outlines each businesses’ menu. The options are diverse from business to business, giving the Tampa community an opportunity to experience Hawaiian poke, a duo coffee and cocktail establishment, bespoke cocktails from an extensive bar with a happy hour, and more! From the voices of awe from coworkers on their culinary experience from the establishments at The Hall, I needed to find out what The Hall on Franklin was all about!

An eclectic mix of food and drink shops

Entering through the double doors of the brick building, I felt like I was Alice falling through the rabbit hole to get to Wonderland. Wait staff zipped around with platters to the patrons who chattered at their table, probably talking about their week or their plans for Labor Day, and the chefs and cooking staff worked carefully behind their respective station to make the next round of dishes. The ambiance of the food hall was very professional, yet no one seemed underdressed if they wore something casual because of the industrial chic nature of the furniture with the mix of woods, metal, and upholstery. The set up was very open, with booths, bars, and tables available for customers to sit. I haven’t experienced anything like it before. I was greeted with a warm “hello” by the hostess and was taken to my booth inside of The Hall.

North Star Eatery was an Asian fusion concept restaurant. The Spicy Grilled Shrimp yakitori was fresh, the sauce glazed on the meat and skewer was tasty and sweet, and sealed in the flavors of the shrimp. The Miso Chicken yakitori had a wonderful char on the meat, giving it a distinct grilled flavor. Biting into the succulent and moist chicken left a slightly tangy taste, every scrumptious bite left us wanting more. 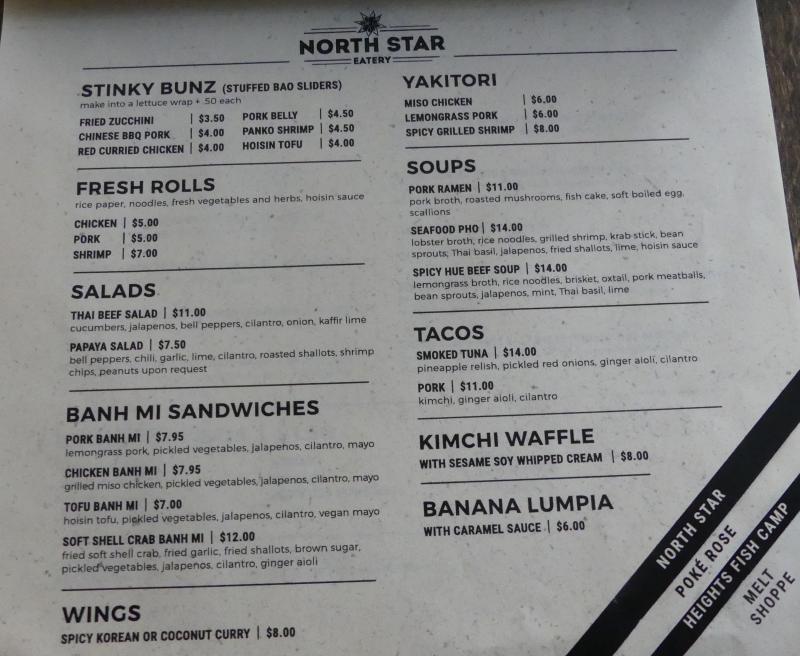 North Star Eatery also had Stinky Bunz which are a variety of stuffed bao sliders. The Pork Belly in the Stinky Bunz was tender, the Asian slaw in the bao gave an additional crunchy texture to the soft steamed bao, with much-needed acidity to balance the pork. The Panko breaded chicken Stinky Bunz gave a crisp crunch when biting into it, then the moist and juicy chicken met with our taste buds. The addition of the slaw made of sliced cucumbers, onions, radish, and carrots gave a freshness to the fusion fare found at The Hall on Franklin. The Pork Banh Mi also really was surprisingly great because I am a person who typically is very picky about my Vietnamese subs! The pork had a wonderful lemongrass sauce which made the meat tasty and succulent, while the cilantro and pickled vegetables added a refreshing element, and the jalapeno gave a nice kick while biting through the fresh, crusty (in the best way when it comes to Vietnamese sandwiches) bread! 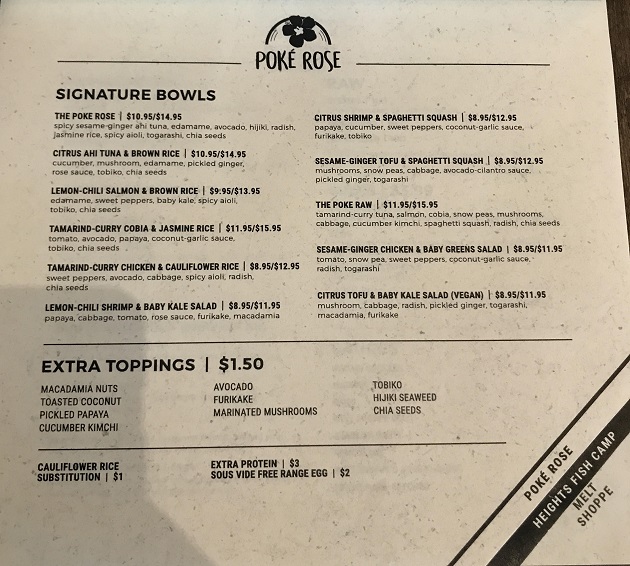 The next place of flavor findings, and personal favorite is Poke Rose. Poke bowls typically consist of sushi-grade fish mixed with a variety of vegetables and a dressing or sauce. Tampa finally has a location for fresh and healthy poke bowls, a wonderful addition to our growing cultural restaurant establishments! The Poke Rose is one of the several signature bowls available for patrons of The Hall to try—in two sizes, too! The tuna ahi tuna was perfectly seasoned with a bit of spicy sesame and ginger, layered with edamame, avocado, hijiki seaweed, radish, rice, seasoning, and a spicy aioli. The bowl was excellent, each bite was nothing but packed with flavor. Tampa doesn’t have anything quite like this, but with the opening of The Hall, I hope a new market for poke shops like Poke Rose pops up!

Coffee and Cocktails, something new!

While I was enjoying my extensive meal, I was intrigued by the menu for Ko-fē because of the unique nature of having both coffee and cocktails. I ended up getting the Bramble Royale since it was in the middle of happy hour while my friend had the Moscow Mule for dinner. The Bramble came out in and was lightly tinted pink from the crème de mure, while the Mule was lightly pale green from the lime wedge sitting on the rim, both served in a tall glass. The taste for both drinks were both crisp from the carbonation of the bubbly in the Bramble and the ginger beer in the Mule and surprisingly a more of a punch than expected from the liquor. The Hall on Franklin between their times of 3:30 through 6:30 PM allows you to experience the happiest of hours. 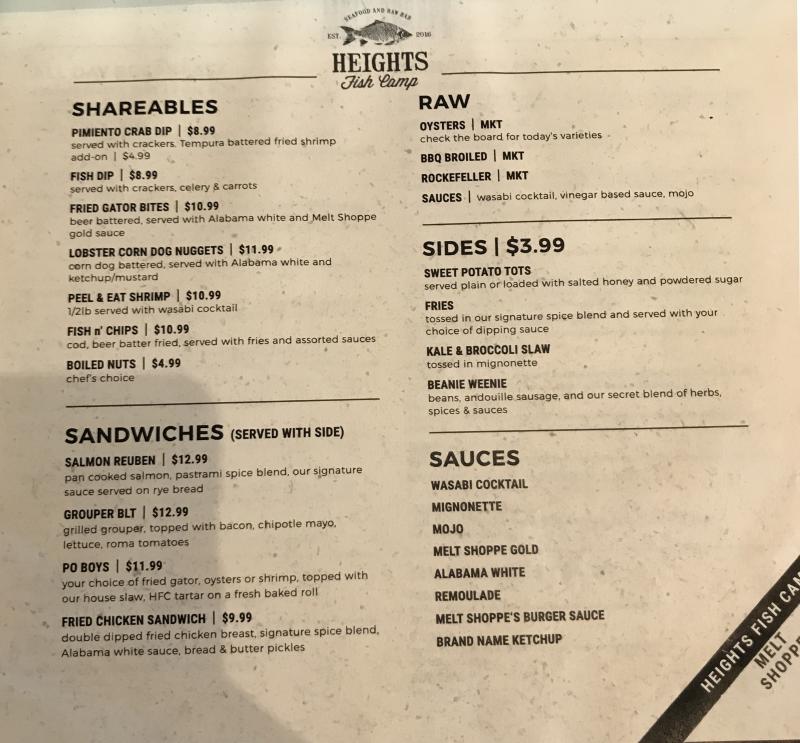 Heights Fish Camp had the most delicious fried gator bites I’ve ever eaten. I was hesitant to order it because gator meat from other places I’ve had in the past were dry and tough, which made me feel like I was chewing for eternity. The bites at Heights Fish Camp were tender, the beer batter perfectly enveloped the gator meat and sealed in most of the juice! Each bite had flakey crumbs of the breading, nicely seasoned to work with one of the sauces we obtained from the Sauce Bar at The Melt Shoppe! As the menu states, Melt Shoppe gold sauce was the preferred condiment of the Fried Gator Bites so we got that sauce with a sauce called the “Big Mick Sauce.” The gold sauce tasted like sweet Honey Barbeque while the Big Mick was a much more flavorful homage to the Big Mac sauce found at your corner McDonalds! 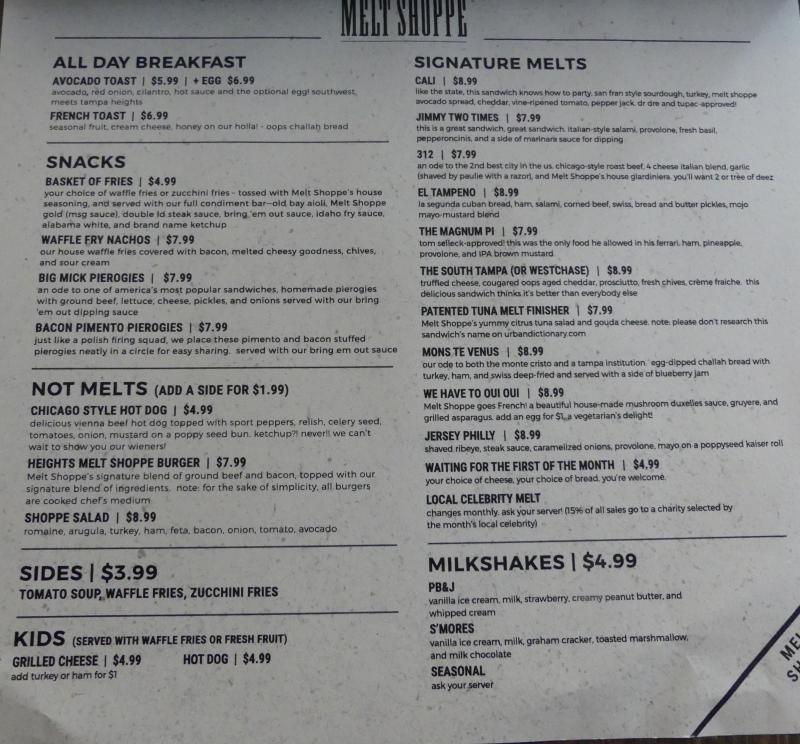 The Bake’n Babes have a large collection of baked treats for the Tampa community. The cupcakes from Bake’n Babes that we had tried were red velvet, vanilla cake with vanilla cream topped with bacon, and chocolate cake with vanilla cream frosting. The red velvet cake could only be described as extra moist when taking a bite into the cupcake, the cream cheese frosting is sweet but not too sweet! The vanilla cupcake was heaven in the first bite given both the sweetness from the cream and the saltiness from the bacon. The chocolate cake with vanilla cream frosting is daintily topped with an edible star sprinkle, yet the first full bite of this cupcake made me see more stars because creamy semi-sweet chocolate ganache was hidden between the cake and cream frosting! What a pleasant surprise! Each of the cupcakes gave a good frosting to cake ratio, so the sweetness of the frosting wasn’t too overwhelming. Bake’n Babes also has salted chocolate chip cookies! Upon the sprinkled salt, drizzled chocolate gave the amount of sweetness that a true sweet tooth would be delighted by upon stopping here! 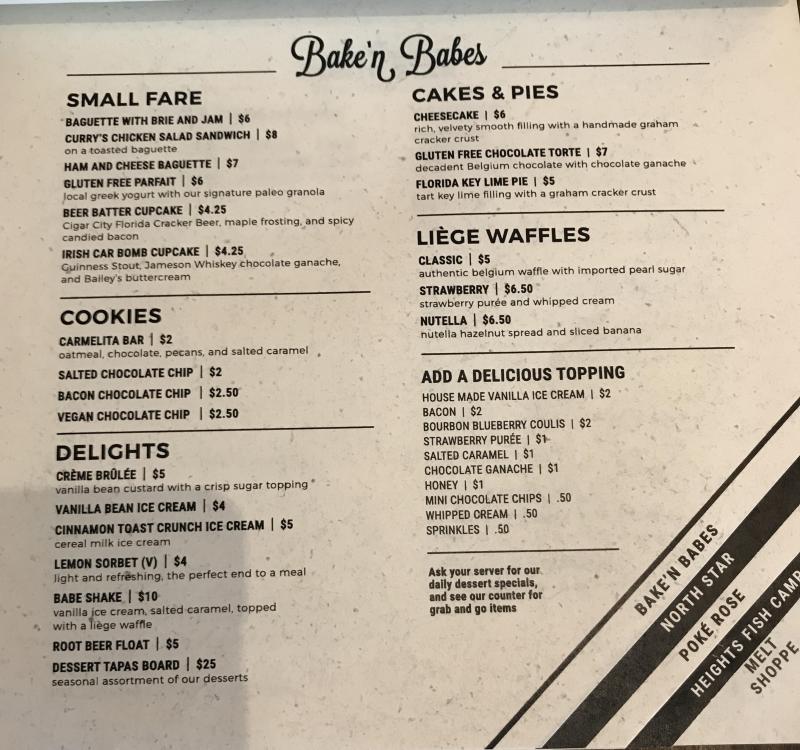 The Melt Shoppe’s menu already impresses me with their quick wit in their description of the Signature Melts. For instance, The South Tampa (or Westchase) melt’s description is, “truffled cheese, cougared oops aged cheddar, prosciutto, fresh chives, crème fraiche. This delicious sandwich thinks it’s better than everybody else.” Funny, but also not wrong in the sense that the sandwich was delicious and just the meal to push me into a comfortable food limbo. The nicely toasted bread was buttered, the prosciutto, and the cheddar was easily making this melt disappear. But, the crème fraise was the star in this melt for me because it gave a tangy richness that needed to cut through the sharpness of salt from the meat and cheese. Also, if you’re looking to be philanthropic while eating, the Local Celebrity Melt is one that changes monthly and 15% of the sales will go to a charity selected by a local celebrity! The S’More Shake was thick and creamy. It tastes exactly like a traditional s’more you get by the campfire, even with the bits of graham cracker and chocolate drizzle made it feel like there was a whole s’more on top. It was the perfect ending to my time in The Hall, even though I didn’t make that much of a dent in any of the menus.

The only location inside of The Hall on Franklin I didn’t get to experience was from The Collection with their wide range of liquors on their grand wooden shelf for a great display of mixology. No worries though, with the Melt Shoppe being the final stop for today, the foodie in me was excited to see where this food hall goes in its future with Tampa. I can see myself taking both friends of Tampa and visitors here to experience such an elaborate and eclectic collection of food and drinks. See you at the next happy hour in The Hall, Tampa!

Connect to everything local in the 813area: Things to Do in Tampa, events, sports, travel, family and more! Your subscription is free!

Where To Eat Chicken and Waffles in Tampa

Where To Get Delivery on Halloween in Tampa

Best Restaurants in Channelside and on Water Street