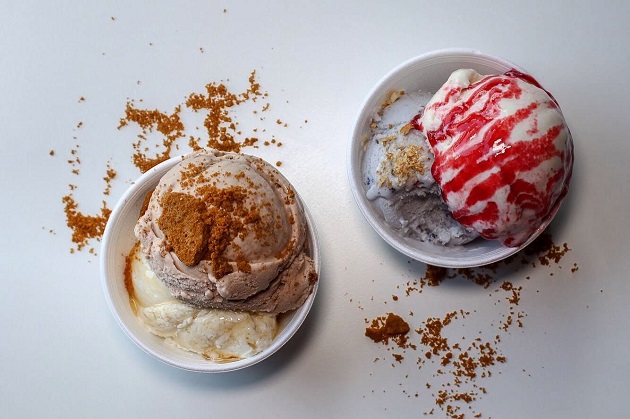 Looking to revolutionize your ice cream palette? Check out the far-reaching The Revolution Ice Cream Co. in Brandon, Seminole Heights, or South Tampa where you're sure to discover a flavor of the frozen dessert that you’ve never tried before. They've created over 100 unique flavors of ice cream since their inception. You'll find cereal flavored ice cream in January or drunken brownies that are made from chardonnay caramel ice cream and brownie bits. New flavors rotate every few weeks and you'll always find something new and one-of-a-kind!

The inspiration for The Revolution Ice Cream Co. came from founder Bill Workman who was visiting his family in Pittsburgh. His brother took him to a unique ice cream shop that served original blends. When he came back to the Tampa area, though, he realized there were not the same diverse ice cream offerings. Bill didn’t want to just sit around and let this happen, so he decided to do something about the lack of ice cream diversity. He then went out and bought a Cuisinart ice cream maker from Bed Bath & Beyond, which he used to experiment with new ice cream recipes.

The first flavor Bill tried out was a mixture of goat cheese, raspberry, and habanero ice cream. After sharing with friends and neighbors, he realized how popular the flavor was and so began the journey! Soon, Bill and his wife were selling hundreds of pints of ice cream out of their home each month. They sold so much to the point of having to buy a chest freezer for their kitchen.

By March 2013, they opened their first The Revolution Ice Cream Co. location in Brandon, then three and a half years later, opened their second location in Seminole Heights. Then this June, another location opened on Kennedy Blvd. and they started up a food truck in Ruskin. On top of all these new ventures, The Revolution Ice Cream Co. team wants to take on a new project called Oh Yeah Creamery in Hyde Park where customers can make their own custom flavors using a base ice cream with an option of coconut milk ice cream, for those who want or need to eat lactose-free.

The ice cream shop typically serves 18 regular flavors and a few seasonal flavors. Some of the flavors that The Revolution Ice Cream Co. offers are Cali’s Hotcakes, which is buttered pancake ice cream with maple syrup on top, or Porky's Delight, which is vanilla ice cream loaded with bacon and bacon brittle.

If you're looking for a unique ice cream experience near you, go out and support an ice cream shop with a purpose and check out one of The Revolution Ice Cream Co and one of their convenient Tampa Bay locations!

Where To Get a Ice Cream Cone in Tampa