Who Has the Best Cuban Sandwich in Tampa? Find Out Here! 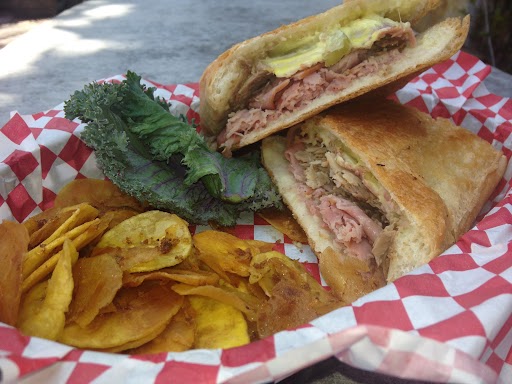 We've all heard about the ongoing battle for "Cuban Sandwich Supremacy" between Tampa and Miami over the years. What city is responsible for creating the Cuban sandwich? Is there really a difference between the two Cuban sandwiches? To whom does the Cuban sandwich actually belong? Well allow me to settle that conflict for you: there's no conflict. It's Tampa.

Yes, they were invented here. Yes, they are different (we use salami, Miami doesn't because they're wrong). And yes, they are better. I am a Tampa native, born and bred, and have studied long and hard on this one. We here at 813area know this won't be without controversy because there is no debate in our city that stokes the fires of Tampanians like this one (except for maybe how to do Gasparilla). The only steadfast rules are you must have ham, pork, and salami, but otherwise, we're allowing for a bit of wiggle room. With the rules established: here is our list of nominees for the Best Cuban Sandwich in Tampa.

Ah, a Tampa classic. This family-owned local sandwich shop has been feeding lines out the door since 1948 and prepares my personal favorite Cuban sandwich. The Cuban at Brocato's is stacked with ham, pork, salami and Swiss cheese on homemade Cuban bread. It's offered in five different, generous sizes. Extra small (4"), Small (8"), Regular ("10), Large (12") and Joe's Special (15"). All Cubans here are served with chips and your choice of unlimited canned soda or 8 oz beer. Brocato's even allows you to order online and bypass the long waits that always fill the parking lots at this Tampa treasure.

Known for their barbecue in Tampa, Station House also serves up on of the best cuban sandwiches in Tampa Bay. Stop by for a quick bite and see just what this North Tampa/Lutz restaurant has to offer.

Though temporarily closed, Joyce's is a popular choice for a Cuban sandwich. They've been in business for over thirty years, so they're doing something right! Although it's not your traditional Cuban, patrons have called it a sandwich on steriods! Overflowing with meat and cheese. They also make their own lemonade - which is delicious!

They're only open 10 a.m.-3 p.m. Monday-Friday, but Gene Anthony's still manages to be a very popular stop for a Cuban sandwich. You might see Grandma at this family-owned and operated restaurant. They've also serve homemade devil crab pies, empanadas, and sweet potato pies.

This Brandon based bakery is also known for some delicious Cuban sandwiches! Their 9" Cuban is made with house-made pork, ham, salami, Swiss cheese, sliced dill pickles, and their special Moreno mayonnaise. And while you're there, grab some dessert too!

Don't be phased by the size of this small "hole in the wall," West Tampa Sandwich Shop is another hidden treasure on this list. In fact, it's likely the most-unique sandwich in the Bay area, the Honey Cuban "Obama Sandwich." It's a traditional Cuban sandwich but with honey! You can try it just the way President Obama did during his visit a few years ago by adding lettuce and tomato for a small additional charge. That's ham, pork, salami, Swiss cheese, mayo, mustard, and pickles on pressed homemade Cuban bread. Sandwiches here are served small, regular or large. This West Tampa legend opens every day of the week at 5:00 a.m. and is located at

Located in Tampa's historic Ybor City District, you kinda just know this one is going to be good. Widely known as "Tampa's original restaurant" Columbia has been serving Cuban sandwiches and traditional Spanish favorites since 1905 and is the oldest restaurant in Florida. Not only is the Cuban Sandwich here top-notch, but the experience and ambiance also take dining here to a whole other level. Today the Cuban Sandwich at Columbia uses the original 1915 recipe of Casimiro Hernandez, Sr., with the same proportions of meat and each ingredient piled on top of one another, placed on Cuban bread brushed with butter on top and pressed to a crispy finish. The sliced, freshly-baked Tampa Cuban bread from La Segunda Central Bakery used at the Columbia puts this sandwich over the top. Reservations are often required at the Columbia, and you can book yours online anytime.

Owned by the Capedevila family for many generations and serving a menu of Cuban and Spanish standards in an intimate surrounding, La Teresita is possibly the best overall Cuban restaurant in Tampa Bay. It has become the most popular hot spot for a delicious breakfast or lunch, cafe con Leche, soups, homemade cooked meals, and of course, the Cuban Sandwich. The Cuban here is typically made with many of the ingredients you see above, but it's served quicker and cheaper than anywhere else. You can enjoy a Cuban Sandwich at La Teresita in a more traditional seated dining room or in the bustling, order at the counter cafeteria filled with customers on lunch break or stopping in for a quick bite during their busy day. There is also an affiliated market and bakery for customers to check out during their visit here. La Teresita has previously been voted the "Comfort Food Award", the "Cheap Eats Award" and the "Best of the Bay" Award.

Full disclosure: this one isn't authentic. But that doesn't mean it's not a delicious spin on the original concept. Instead of using traditional Cuban bread, Datz's Havana Hottie is on a batard. There's no salami (like those heathens down in Miami, that's called a "mixto" BTW) and you get a much sweeter honey cup mustard instead of something yellow or spicy. It's terrific, but it's not the real thing: you'll have to head somewhere else to say you've had a "real" Cuban. But it goes great with their blue cheese-drizzled chips and other hifalutin treats in South Tampa.

Again: not the real deal, but that's the only way you can argue about this. Wright's is as much of a South Tampa institution as hoity-toity air kisses and people running red lights on Henderson Blvd. There's often a line down Dale Mabry Blvd. for lunches, but in addition to roasted pork with ham, Genoa salami... they add turkey breast. The pickles and Jarlsberg cheese with mustard served on fresh Cuban bread is as 813 as a hand-rolled cigar, and it is a six-time winner of the Tampa Tribune's (RIP) All-Tampa Cuban Sandwich Contest, but... turkey. Also, be sure to allow 15 minutes for this one when ordering.

A cash-only locals joint connected to a transmission shop but don't be fooled by the lack of visual presentation. Palm Ave. Sandwich Shop makes an incredible Cuban sandwich and for a great price! Like a few places on this list, you can get by without English if necessary, and it's open for breakfast at 7 a.m. during the week so grab a con Leche too. It's about as authentically Tampa as you can get, and is one of the institutions in this town.

So that's our list for the best Cuban sandwich in Tampa. May the debates begin. But if you want to find out more about dining in the Tampa Bay area, make sure to visit and register for 813area.com. It's your FREE resource for events, nightlife, restaurants and more!

Darren   1 year ago
We have a new title contender! Edge City BBQ in Oldsmar has a Cuban with thick smoked meats, all traditional ingredients, and real Cuban bread. Don't sleep on it!
D   1 year ago
Laborias has the BEST cuban sandwich! Better than brocatos!!!
carlos   1 year ago
D & D"s between Ybor and The Port of Tampa is hands down the best in town!
John   1 year ago
For the best in non-traditional Cuban - The Stone Soup Company 7th
Christopher   1 year ago
West Tampa is the best in my opinion, and the ropo viejo6
Fernando   1 year ago
This list is sad...so are some of these comments. La Segunda
Ricardo   11 months ago
How is La Segunda not on this list? The fact that La Segunda not only doesn't top the list but isn't even on the list is very pathetic. I suggest the writer go there and then write a revised version of this lost.
Dilat3d   11 months ago
Stone Soup in Ybor, get the Trumped up version .. it's delicious
Tampa   10 months ago
Born and raised in Miami.I moved here Three years ago and have not found a good Cuban sandwich or Cuban bakery.
Albert   10 months ago
La Segunda has the best
John   8 months ago
La Segunda and Strawberry Hut in Plant City should both be in the top 3 with West Tampa Sandwich Shop
John   8 months ago
Brockton has became ridiculous since they put them on Diners, Drive ins, and Dives. It's now an overpriced yuppy haven.
John   8 months ago
Brocatos not Brockton, danged auto correct.
Peter   5 months ago
Datz? Why not just include the best Reuben and say it's not original but good? There is no argument about Cuban sandwiches, your family must be new to tpa.
Don   4 weeks ago
How could you possibly overlook Michelle Fado's? The documented WINNER in a Tampa Miami showdown. For shame.
Gregory   3 weeks ago
La segunda by far, this restaurant was listed in a Tampa magazine in publix supermarket for have the #1 Cuban sandwich in Tampa, how did they not make this list.
Oliver   2 weeks ago
I disagree with The Columbia or La Teresita having good Cubans. I'm surprised the Green store didn't make the list! And, if u want the best "spin" on a Cuban (i.e. Wright's & Datz), go to Gonzo's sandwich shop n get the West Tampa.
Ace   1 week ago
I'm from Miami and LA Segunda Bakery has the best cuban sandwich. I even know that
Rebekah   2 days ago
I can agree with most of this list except some I believe deserve a mention…. Like La Segunda, Interbay Meat Market and one of my favorites Victoria’s in South Tampa.
Jake   1 day ago
Datz shouldn't be on this list. The lack of Cuban bread alone should have that Samsandwich
Jake   1 day ago
Datz shouldn't be on this list. The lack of Cuban bread alone should have that sandwich on this list. I have no other problem with the majority of this list. The lack of salami is an issue. Having French bread... Bayard not Cuban beat makes that invalid. wich
Katherine   21 hours ago
What about Cacciatore’s? They have always had one of the best Cuban sandwiches

Where To Get a Ice Cream Cone in Tampa