Chef Art Smith has achieved enviable success for his Southern-themed restaurants, of which there is much high-profile clientele. This includes his decade-long position as Oprah’s personal chef and current culinary role as on-the-road chef for Michelle Obama during her “Becoming” book tour, plus appearances on popular TV shows like Today and Top Chef to name a few.

The sixth-generation Floridian has carved out quite a career that has earned awards for his cookbooks, honors for his humanitarian efforts and praise for his efforts to restore and preserve historic buildings.

Now he is sharing some of that seemingly endless talent with Tampa Bay residents, and visitors alike, courtesy of a culinary collaboration with Splitsville Southern + Social.

The re-opening of the bowling-themed Splitsville at the Sparkman Wharf waterfront development in Downtown Tampa debuted last year with, not only a new look, but a new menu as well. There you can devour the deliciousness that can only come from Smith’s famous fried chicken, scratch-made cheddar biscuits, hot honey chicken biscuits, short rib sliders and more.

No need to travel to his acclaimed restaurants in Chicago, Washington D.C. or even Central Florida’s Disney Springs to dine on the highly touted Southern fare featuring a twist that has been Smith’s claim to fame. But be warned: once you try his food, you may find yourself making plans for road trips to enjoy his other restaurants.

“Splitsville and I have been friends since we put together the restaurant Homecomin’ at Walt Disney World. I started working on that concept and it was a five-year process. I started with no money,” Smith recalled. “As it progressed and developed, Disney created an arranged marriage. They said they had a partner they wanted to introduce to me and it was Splitsville. They provided the backing for Homecomin’ and that started our relationship.” 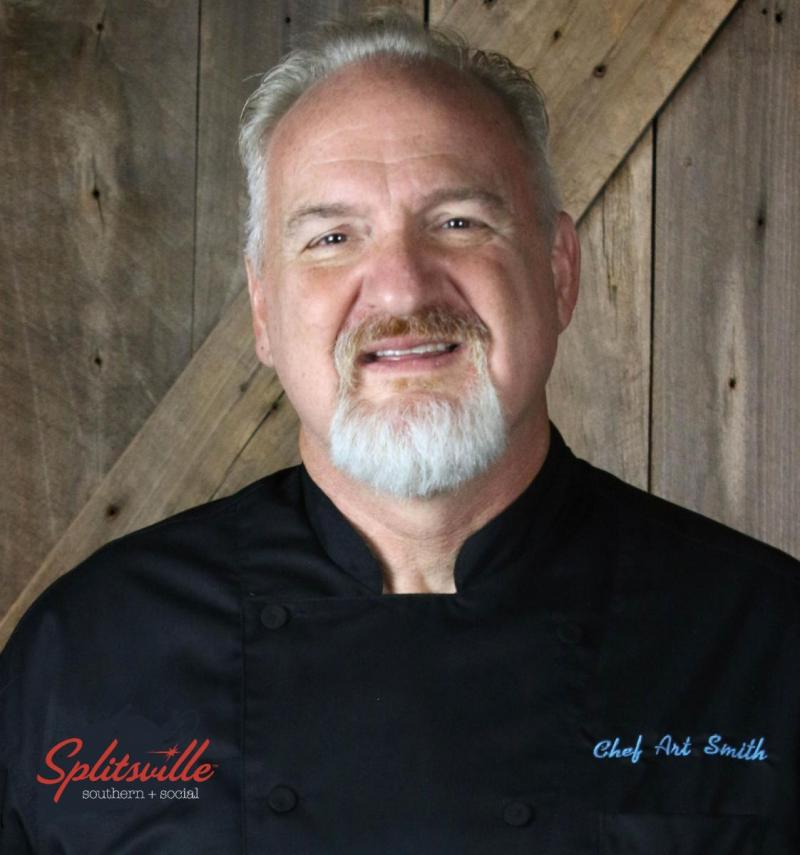 Two years later, Splitsville representatives invited Smith to be part of the reimagining and relaunch of the original Splitsville in Tampa. It is an exclusive arrangement which means the Southern dishes on the Tampa menu are not available at any other Splitsville locations.

“People come here to bowl, and there is nothing wrong with that, but you’ve gotta have something good to eat. I just did fried chicken in Live Nation concert halls across America,” Smith said. “People want good food wherever they are, whether it be in a bowling alley or a concert hall.”

It was while attending Florida State University and studying to be a chef that Smith got his first big break.

“I was not a great student and the dean felt sorry for me. He sent me over to the Governor’s mansion and Mikhail Baryshnikov came to dinner. They didn’t have a chef so I cooked for them and they hired me to be their chef. I didn’t finish school,” Smith said, adding that eventually he was awarded an honorary degree from FSU.

“When I grew up boys weren’t allowed in the kitchen. We were supposed to work on the farm. I was taught by two French chefs and the staff at the Governor’s Mansion who taught me Southern cooking.”

Well before his college days, the foundation was already in place for the infamous fried chicken that is a major part of Smith’s culinary pedigree.

“My first job was at Kentucky Fried Chicken when I was a kid,” he acknowledges. Of course, his version of fried chicken is completely his own and a proven crowd-pleaser.

While well known for classic dishes like shrimp and grits, famous clients such as Sofia Vergara and awards from the prestigious James Beard Foundation, what really motivates Smith is the opportunity to use his food-related experience and expertise to impact lives, promote healthy lifestyles and provide livelihoods.

“It starts with investing in a community, whether it be in education, creating services for mental health and addiction or teaching kids to eat better,” he said. “We don’t live in the land of perfect. If I can be a beacon of light and instigate change then that is what I want to be.”

This year he will travel globally to Bosnia with a diplomatic group to help people with their businesses, specifically restaurants. Then to Jordan to help with a refugee camp and from there to Syria.

“I just love being a chef. I love that it gets me lots of work and it keeps me there. I love food. Everybody loves to eat,” he said. “ And I like that food enables me to be a philanthropist. I love helping, people and I love being able to do what I care about, whether it be historical preservations or creating programming in the community that helps with changes.”

Among the buildings he has helped to retain their charm and character, and remain vibrant and vital, are a 19th-century Chicago carriage house, a part of New York’s historic Grand Central Terminal. and the Wardlaw-Smith House that dates back to the 1850s and is located in Madison, Fl, near his hometown of Jasper.

“It is great to have the Beard awards and all of that but I remember I was somewhere in Chicago and a woman came up to me and said, ‘You’re that chef.” I waited for her to say something about my working for Oprah. Instead she said, ‘You’re that chef that taught my child to cook.’ I love Ms. Winfrey. She made me legitimate but I love the fact that in my own way I’ve changed a child’s life by helping to teach him how to cook.”

Looking for additional places for great food and drinks in downtown Tampa and throughout Tampa Bay? Simply register at 813area or 727area. It’s easy and free!