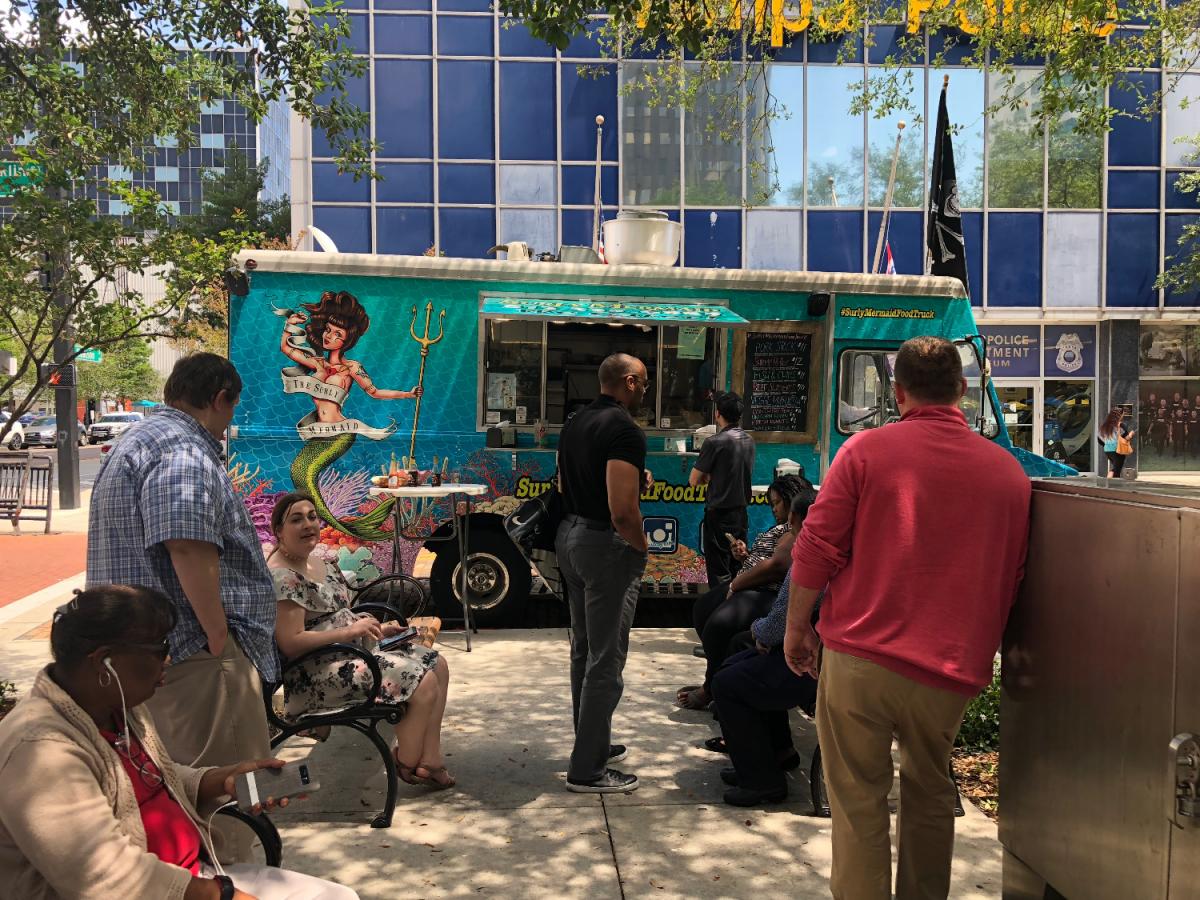 Now that I work downtown, what I didn't realize is on the first Wednesday of every month food trucks meet in Lykes Gaslight Park to serve the working class of Downtown Tampa. There are men in Bank of America polo’s and women in sundresses and work suits alike grabbing food from vendors that all have a common purpose: to keep the hungry full.

It was Wednesday, April 3rd around 1 p.m. when I stumbled upon the Mayor's Food Truck Fiesta. There were eight food trucks at the event, but two of them had already shut their doors (Hot Mess and Mr. C’s Grilled Cheese) because the park was so packed with customers. Along the sidewalk I saw that each truck seemed to have a theme from the Pasta Truck to the Anju Korean Gastrotruck, with food was being served to all types of industries from all over the world.

The trucks provide every type of cuisine available, and represent the diversity and breadth of what's available in Tampa. It's fantastic, and here's just a sampling from one gal's taking a lap around the park in search of deliciousness!

Mr. C’s Grilled Cheese offers that bite of comfort food, just like your mom used to make, that everybody is looking for during a long day in the office. Their grilled cheese sandwiches are offered in seven different varieties from the Plain Jane to the Full Monty. Their original sandwich has two slices of Texas toast slapped on the flattop with melted cheddar and American cheese between them. They pride themselves on their expertise in matching each of their cheesy sandwiches with its perfect dip. For the Plain Jane: warm tomato soup. One of their best and most ordered gourmet sandwiches is the Full Monty. It is comprised of cheddar and chihuahua cheese, pulled chicken, bacon and a slice of tomato all melted together in between two slices of golden brown Texas Toast. But if you’re looking for a healthier option try Mr. C's Grilled Cheese Fancy Caprese (made on multigrain bread).

The Hot Mess food truck is filled with sugar, spice and everything delicious! With its pink and black theme and anything goes attitude they serve up tater tot creations piled high with extras. Their original idea came from their Hot Mess Tots which are tater tots topped with seasoned ground beef, bacon cheese sauce, chipotle lime crema and scallions. Now they serve up variations of their Hot Mess Tots like the Buffalo Chicken Tots, Mexi Tots and Dirty South Tots. You can also build your own bowl with a base of either tater tots or mixed greens. For the base you choose one protein and one cheese from a long list of options, melted and hot when handed off to you. They also serve salads and street food like hot dogs and sandwiches. For sides, they offer cheese curds, toasted ravioli, sweet corn nuggets or, of course, tater tots.

The big orange truck that has golden ticket words like “pancetta” and “slow-roasted pork,” is Vanchetta. It is dedicated to pancetta; the slow roasted pork belly that is Italian cured. They serve up burgers and sandwiches that all involve the slow-roasted pork. The signature Vanchetta Sandwich is slow roasted pork, provolone, aioli, slaw and red onion marmalade all served between two slices of toasted bread. The Porchetta N’ Sauce with their pork, provolone and spicy tomato sauce. The two burger options are the Vanchetta Burger and the Black Bean Burger. The Black Bean Burger is their vegetarian option because they want to serve everybody! For Their side they have patatas bravas which are italian home fries topped with spicy tomato sauce and aioli, you can also get them topped with porchetta!

The Surly Mermaid serves up six different American beachside dishes from their green and aquamarine truck that looks like it came right from the sea! They steadily hand their long line of customers Shrimp Po Boy’s, but they didn’t forget about the meat lovers or vegetarians with their Pork Stack sandwiches or their Veggie Muffuletta. Their Shrimp Po Boy is filled with golden tempura fried shrimp, remoulade sauce, shredded lettuce, tomato on homemade surly bread. The Pork Stack includes Carolina pulled pork, shoulder bacon, gouda, fried onion straws all on a brioche bun with a mustard drizzle. For vegetarians they serve up a portabella mushroom, roasted eggplant, zucchini, yellow squash, red peppers with herbs, garlic, olive oil and gouda on a brioche bun called the Veggie Muffuletta. For dessert The Surly Mermaid offers unicorn horns or fresh donuts… if you’re still hungry!

Pasta Bowl is the Italian Food Truck of your wildest pasta dreams! They serve four different versions of pasta and five different sandwich options out of their red, green and black Italian-themed truck. The pasta bowls were plain pasta with butter and olive oil, the penne alfredo with grilled chicken, the rigatoni bolognese and the pesto with sundried tomatoes. It's all served in a large enough bowl to feed two, but be sure to get there early because they run out fast! Their sandwich options include the caprese panini, a pressed Italian, the Mediterranean wrap and the muffaletta. Their most popular (which happened to already be sold out the day I went) was the homemade meatball sliders with provolone cheese and marinara sauce. The guy in the Pasta Bowl truck told me they were sold out within the first 30 minutes of the event due to their long line. For dessert, try the fresh cannolis and Tiramisu.

The Twisted Indian food truck is another that requires an early arrival as they also sold out of food during the event. You can smell the curry and fresh meats as you pass their golden truck, but you can also see it from a mile away because of the 30+ people long line in front of it. They serve a Bollywood Bowl, a Currito and Yogi Fries as their main dishes. A Bollywood Bowl is your choice of protein, fresh spinach leaves, white basmati rice, curried slaw, Raita yogurt sauce and cilantro. A Currito is all of that wrapped up in a burrito. Your choices for proteins are lamb korma, chicken tikka masala and paneer tikka masala. They also have Yogi Fries which are crinkle cut fries, mozzarella cheese, tikka masala sauce, curried slaw, cilantro and raita yogurt sauce. They sold out of everything halfway through the festival I was at so I didn’t get to try it. The Twisted Indian smelled amazing and the line was the longest one there before they shut it down. Get there early to try it!

This artisan Italian food truck makes appetizers and wraps with recipes that came straight from Italy. Their appetizers usually sell out first, and are meat and veggie arancini and parmesan truffle fries. An arancini is a fried risotto ball stuffed with cheese and prosciutto or vegetables and fried until golden brown. For their meals, they offer eight different flatbreads and four of them were already sold out before I arrived. The ones remaining were the Margherita, the grilled chicken, the meatball and the Itali-bano. The Itali-bano is a wrap filled with Italian braised pork shoulder, prosciutto, pickles and mustard aioli. It’s the Italian Cuban! Their most popular that was already gone before I got there is the Hawai-lian which is the Italian breaded chicken, crispy prosciutto cotto and fresh pineapple. For dessert Impasto had cannolis. It made me think I should try both these and the Pasta Bowl's to see whose are better!

Anju is a sleek dark blue truck with fun and colorful art patterns running across it, which doesn’t surprise me because they come from St. Pete. They serve six dishes and some Korean food a la carte. Their most popular are the K-Pops and the BAP Bowl but I tried the Oko Tots. The K-Pops are boneless Korean fried chicken in either a soy garlic sauce or a St. Pete heat sauce. The BAP bowl is a Korean bibimbap bowl with beef bulgogi, steamed rice, carrots spinach, sprouts and kimchi, topped with BAP sauce that you can add a fried egg to for an extra $1. But I tried the Oko Tots because I love pickled red ginger, and they were so unusual and amazing. They’re topped with Japanese mayo, okonomi sauce, aonori, smoked bonito flake, crumbled bacon, scallions and that pickled red ginger. If you’re looking for something lite try one of their a la carte items: pork egg rolls, tater tots, kimchi, steamed rice and extra sauce. They emphasize their attention to detail in the presentation of your food so be sure to bring your phone on lunch break to impress your friends on Snapchat!

So be sure to stop by the Lykes GasLight Park on May 2nd or June 6th to try any of these food trucks! Or look online at where they’ll be next if you can’t wait… I know I’ll be tracking Anju Gastrotruck after those Korean Oko Tots!

For more information on Events and Restaurants in Tampa check out 813area, your free guide to everything Tampa!

Where To Eat Chicken and Waffles in Tampa

Where To Get Delivery on Halloween in Tampa

Best Restaurants in Channelside and on Water Street