The Best Deals in Tampa Bay On National Wing Day 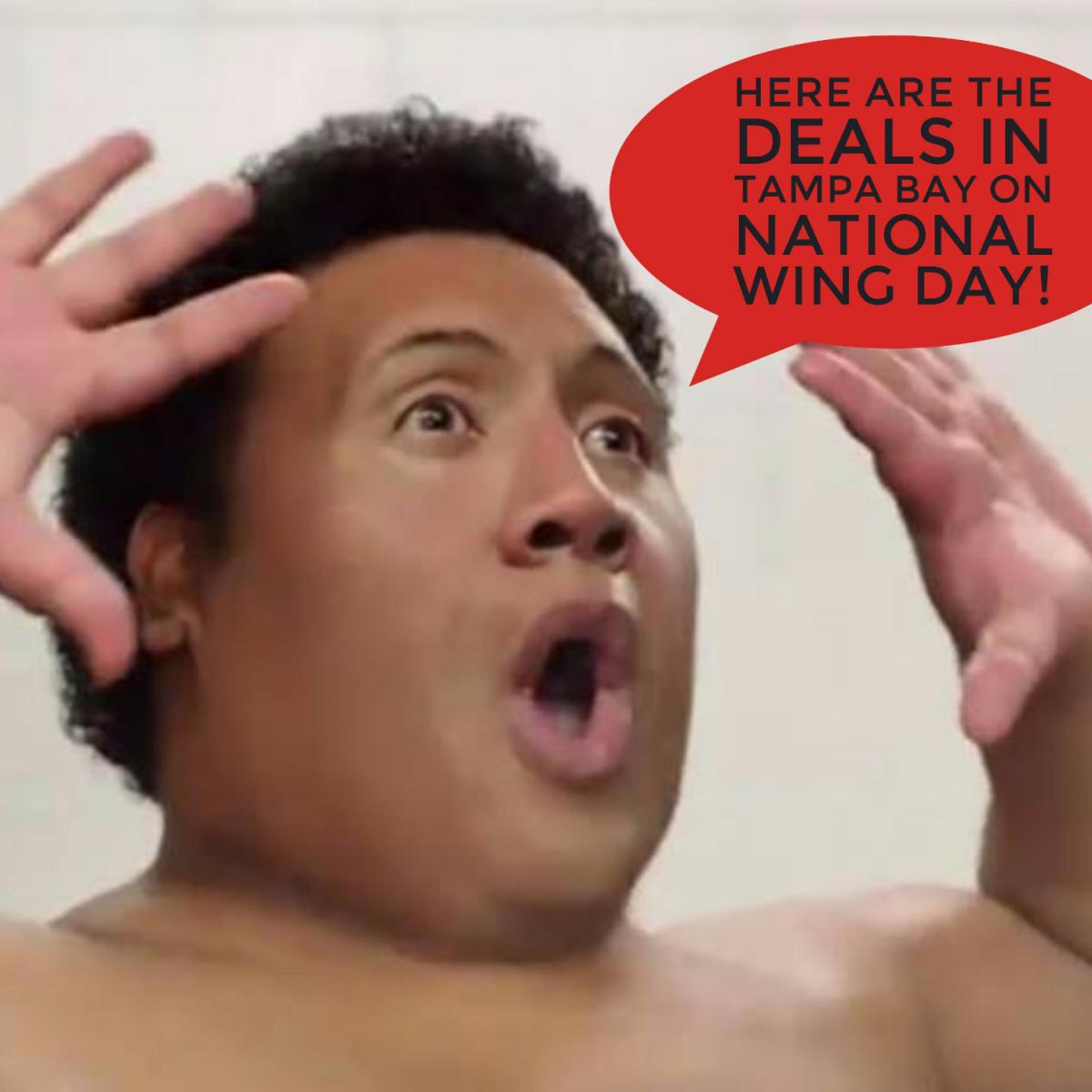 It was 1977, the lowly chicken wing skyrocketed to stardom, placing itself front and center on the plates of millions of Americans when Buffalo's Mayor, Stan Makowski, proclaimed July 29 National Chicken Wing Day! Invented by mistake in 1964, promoted by the Buffalo Bills, chicken wings gained popularity to the point where in 2013 restaurants reported a nationwide chicken wing shortage! Fortunately there isn't a shortage on July 29, 2016. Yes, it's that auspicious day once again, the day when we are offered the BEST deals on this 5 Decade Old American Treat on National Chicken Wing Day!  Need to know where to find: The Best Deals in Tampa Bay On National Wing Day?  Here we go!

With 2 locations in Brandon, you will also find Ker's Winghouse on Hillsborough Ave in Tampa, in Wesley Chapel, Palm Harbor,  Clearwater, Largo, Pinellas Park, and St. Petersburg, Ker's has GOT you covered tomorrow! If you have never been, tomorrow is the day to get your Wings On at a Ker's near you.

You will find they are a relaxing, casual sports-themed bar and grill serving great pub food in a family-friendly atmosphere. Tomorrow you get 5 wings FREE with every 10 you order AND you can place your order online!  The deal includes Ker's Original and Buffalo Wings only, not the nakie ones, and you dine-in for this deal, which is always FUN at Ker's. 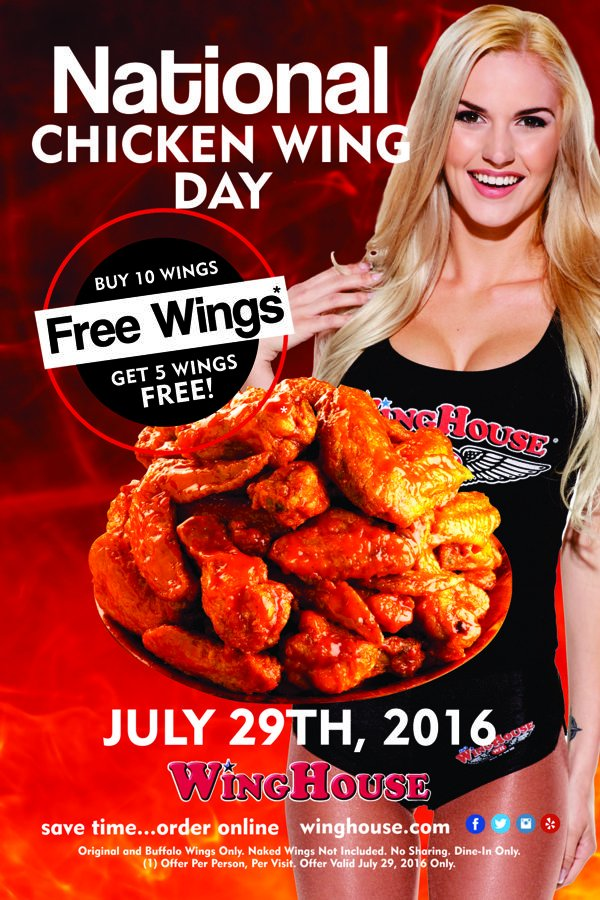 With several locations around the Tampa Bay area, Anthony's Coal Fired Pizza can be found in South Tampa, Carrollwood, Brandon and Clearwater. If you have only tried their pizza you are missing out on a treat!  Anthony's roasts their chicken wings in their coal fired ovens, super crispy and delicious they are served with focaccia bread and caramelized onions.  A small order is ten a large order, twenty. 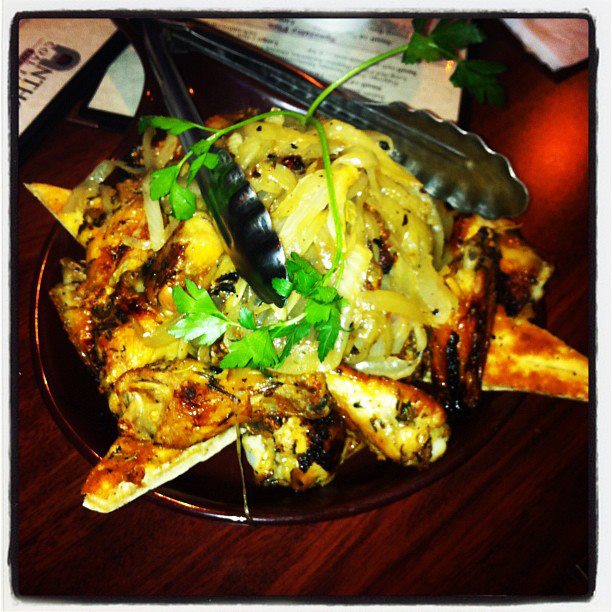 Kick back with cold beer and hot wings any day of the week at Hooters, and on National Chicken Wing day look for the best deals on their famous breaded and naked wings. Tomorrow, at all participating Hooters, you can save money slamming some wings!  It's All YOU CAN Eat for 12.99. Here's where you will find Hooters in Tampa Bay:

Located on South Howard Ave, the Yard of Ale SoHo features craft beer with weekly specials, trivia, Cornhole tournaments and more. On National Chicken Wing Day you can score .50 wings all day in South Tampa at Yard of Ale. 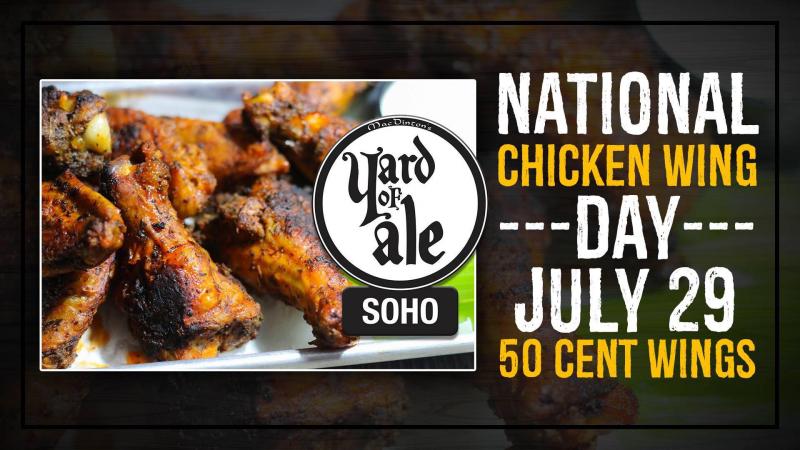 The new Wing Zone located on Bruce B. Downs in North Tampa is known to regulars as the "Home of Wings, Burgers and Flavor". On National Wing Day stop in anytime during the day for wing specials or for an all you can eat "Happy Hour" from 5pm-7pm!  Yes, ALL YOU CAN EAT for two hours! You can also go online to order and receive discounts.

True wing lovers will argue endlessly about which are best, drums or flats, breaded or unbreaded, sauced or naked wings.  Then there are the flavors, not only mild to inferno but teriyaki, garlic parm, sweet, savory, hickory smoked, BBQ, Cajun, Lemon-Pepper, Original and who knows what they will think of next! Truth is you can get a wing just about any way, so join us in celebrating National Wing Day Friday, July 29th, as we pay homage to this icon of all food icons, 50 years plus and still going strong - THE chicken wing!  Now you know what is happening, where and when, all that's left for you to decide is the WHO and HOW, because the WHY is a given!  So call an Uber or Lyft, grab your friends and check out one or all of these iconic wing places on our list of: The Best Deals in Tampa Bay On National Wing Day!