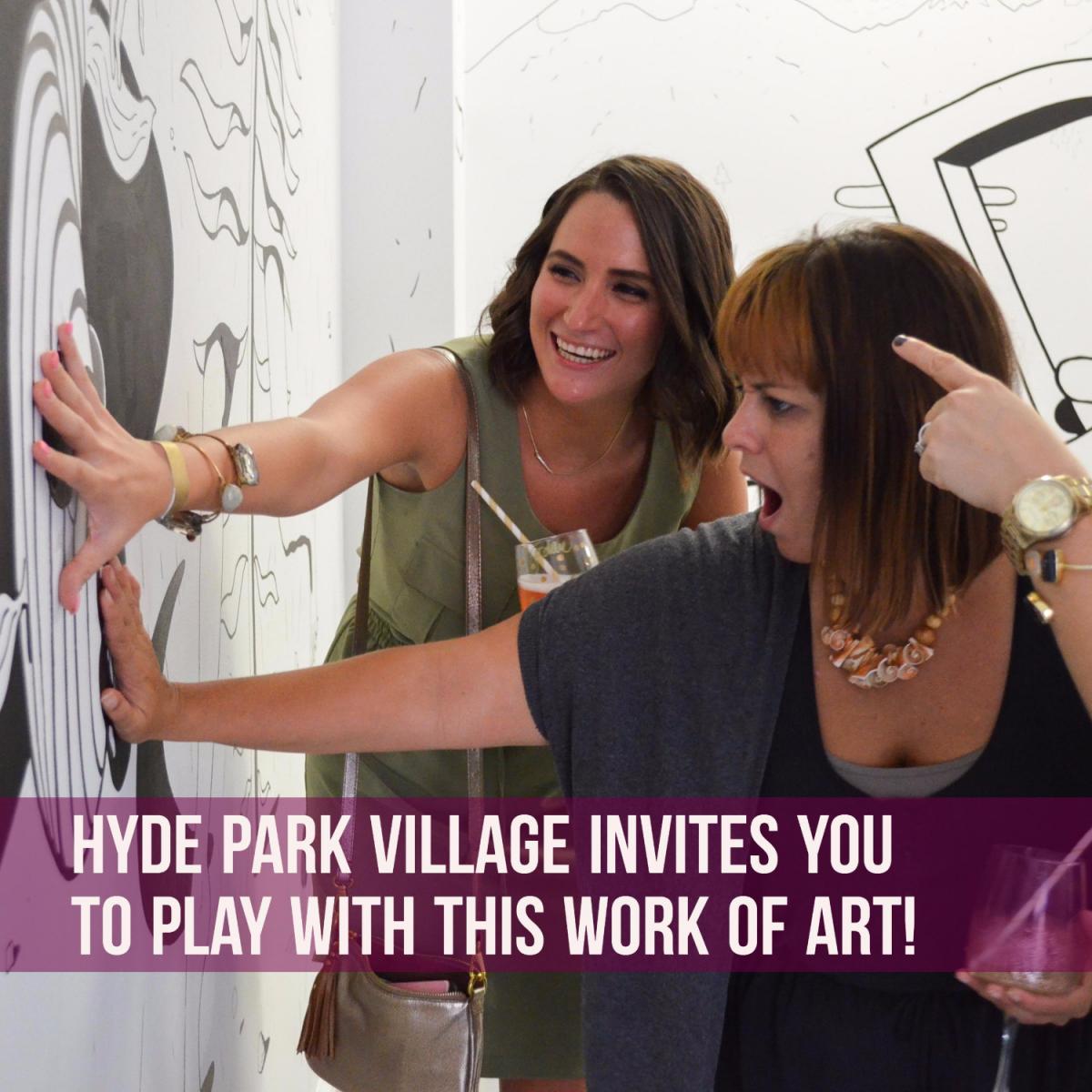 New art exhibit in Hyde Park Village combines interactivity and art, Hyde Park Village is becoming much more than just a place to shop. The Village is now a place where locals and tourists alike can come together to play, hang out and have fun with the new art exhibit, Ambient Play. This isn’t your average art installation, though. Ambient Play features murals that trigger sounds when touched, turning a normal art piece into an interactive one. Local muralists Sebastian Coolidge and Justin Wagher partnered with Tampa-­based design firm, The Urban Conga, to create an innovative art installation designed to generate music through art.

“A lot of people just come in the stores and don't really engage with one another,” said Ryan Swanson, executive director of The Urban Conga. “We wanted to create a space of community and creativity for people to get to know one another. When you introduce play, it really begins to break those barriers down and you put your phones down to actually engage with one another.” Ambient Play had its kick-­off celebration Friday night for its three­-month-long exhibit. Dozens of people came to the exhibit throughout the night to experience the art, enjoy drinks from Commune + Co. and play ping-­pong. Adults looked at the art in awe, while children laughed at the sounds the wall made. 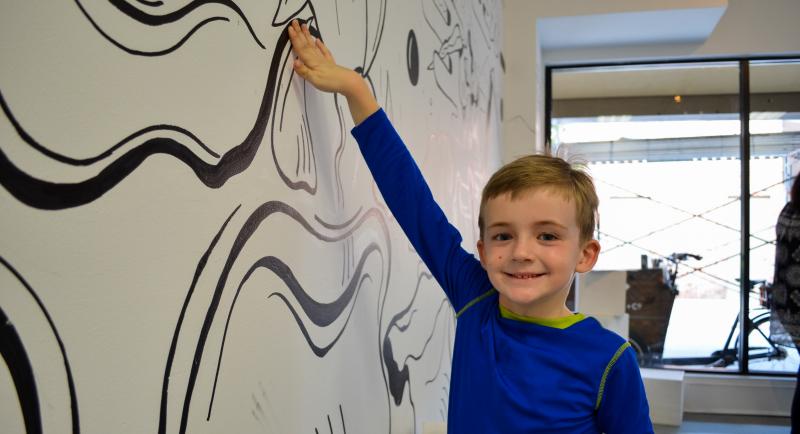 People of all ages enjoyed touching the murals and hearing the different sounds that the art exhibit made.

“It's really innovative,” said Alina Klein, who lives in South Tampa. “I've never seen anything like this, especially with the interactive paint that they're using.” Coolidge and Wagher’s murals are one­-of­-a­-kind pieces, where people can touch parts of the mural to activate certain sounds. These pieces of art are made possible with Bare Conductive, which is electric paint that acts like a wire. When you touch the paint, it creates an electric current that is delivered along the paint and connects to a speaker to project a noise. Bare Conductive is a Kickstarter startup that raised nearly $200,000 U.S. dollars to help build and support their project transforming touch to sound.

Different parts of the Ambient Play exhibit make interesting and captivating sounds when you touch. If you touch the girl’s ankles in Coolidge’s painting, you will hear a jazzy sound echo across the surround sound speakers. You can also touch the tiger’s nose in Wagher’s mural to hear it make another, more menacing sound. To find the other parts of the painting that make noise, you’re going to just have to visit the exhibit at Hyde Park Village.

While Hyde Park Village may be under construction, there are big plans to further reinvent and rejuvenate the South Tampa gem. “We're looking for unique and fun experiences to draw people to the Village,” said Gabby Soriano, director of marketing for Hyde Park Village. “We're giving it the love that it needed to keep up with the times... We also want to be able to appeal to all ages. This exhibit represents that. It's a place adults can come and appreciate, but kids can too.” 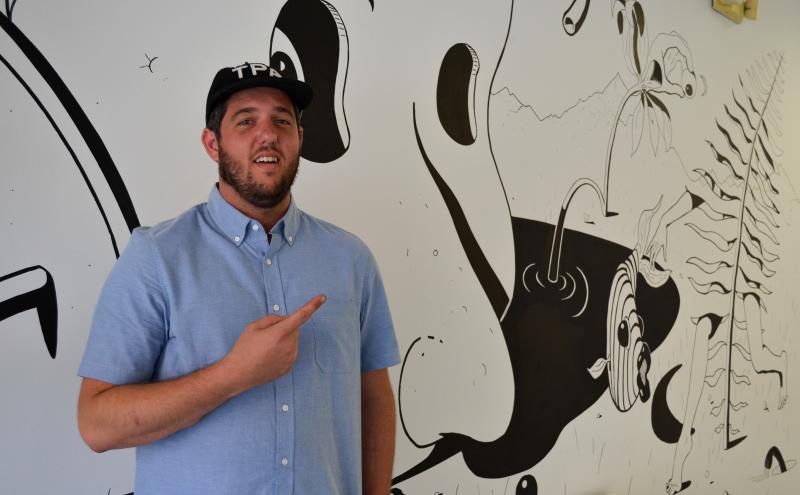 The Urban Conga has several interactive art exhibits installed throughout the Tampa Bay area. Some are in public spaces, like ping­-pong tables in public parks or a Color Code Bench on the Tampa Riverwalk. The Urban Conga also had art projects installed for the Tampa Bay Rays at Tropicana Field, at the Gasparilla Festival and for Lights on Tampa. Coolidge is a Kansas City ­native and St. Petersburg­ based muralist, whose work can be found on office buildings, shoe stores, alleys, cafes and barbershops across St. Pete. Chances are good you have likely seen, walked past or driven by one of his pieces while visiting the city.

For Ambient Play, Coolidge described his mural as a “surreal and multi-­dimensional concept” that “shows people what they haven’t seen before.” The entire piece took two days to complete, which Coolidge says is the average amount of time it takes to complete a mural. Wagher is a local up­-and­-coming artist whose art can also be found throughout St. Pete. He has been a part of the local art scene since he was 13, a time when Coolidge, and local artist Derek Donnelly, began mentoring Wagher, a recent graduate from The Pinellas County Center for the Arts at Gibbs High School.

Wagher chose to incorporate traditional Japanese illustration work in his mural for Ambient Play, while also keeping it simple. During the last month of the exhibit, people will be able to interact with Ambient Play on a whole new level. A well-guarded secret at the moment, all I can say is that you’ll be able to bring color to Coolidge and Wagher’s murals. You’ll just have to come to The Urban Conga art exhibit to see, and interact with, these murals yourself. 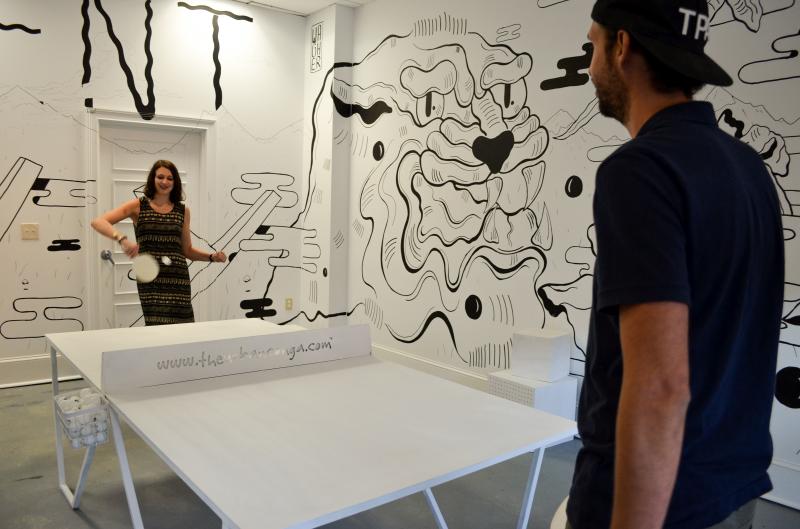 Tell us what you think, have you been? Have you seen or played with other Urban Conga designs in the Bay area?  We look forward to reading your comments below, connect with and rate Hyde Park Village , The Urban Conga and supporters of art in Tampa Bay like Commune + Co. Coffee. Stay on top of great things to do and see in Tampa Bay on 813area and our sister site 727area.com

Lisa   5 years ago
Shop best and attractive collection of art over here.