For Oliver Gray of ODG Enterprises, Insurance Business is Personal 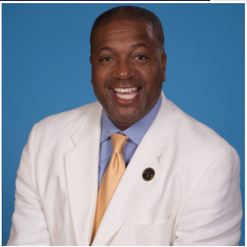 People come to the insurance business for various reasons, but for Oliver Gray, life insurance has been a major part of his personal journey long before he opened his firm.

“It all stems growing up in Philadelphia,” says Gray, who relocated to Florida in the early 2000's. “In March 1981, three months from graduating high school, my sister was 11 and I was 17. My father was on the kidney waiting list, but he passed away on the morning of my senior prom at just 37, and he had no life insurance.”

Gray had to scramble to borrow money for college, whereas a life insurance policy would have helped belay some of the costs. He graduated from Kutztown University in Pennsylvania, alongside NFL great and friend Andre Reed, which became a fortuitous tie to the NFL later in life. But he also left school with $20,000 in student debt, and that would be a burden for much of his early life.

Oliver moved with his family to Orlando while working for Verizon Wireless, the move funded by an Aunt that left a policy behind after an untimely passing. Eventually he found himself working for the Tampa Bay Buccaneers in sales for four seasons, and his passionate love of sports still burns brightly, but he always wanted to be in business for himself.

That business became ODG Enterprises, Inc., a life insurance agency where Gray now tries to assist people having the same issues for their family and relatives via quality, comprehensive coverage.

“People know if you are real, or you’re not real, and you can see through it really fast,” says Gray. “When I sit down with clients in this business, I have to be honest with you because I've been there myself." Gray at ODG Enterprises represents multiple insurance carriers, working to find the best available policy and cost for his customers. But the desire to provide insurance comes from a personal story where the product became so valuable.

"If you want someone that cares about you, not just cares about a commission, I'm available 24/7. Because I've been there."

For more business in Tampa content, keep it here at 813area. And be sure to register, it's free!

Oliver   4 years ago
Appreciate the support!