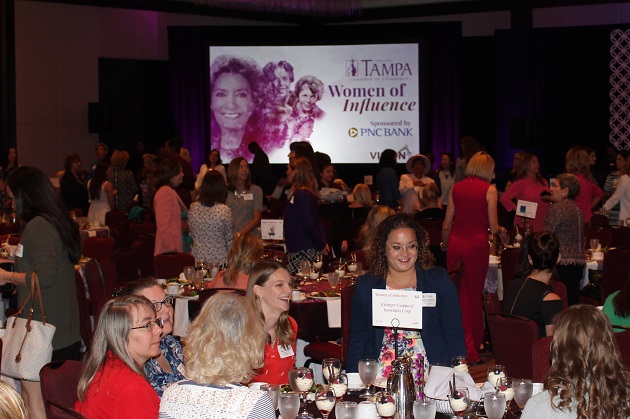 Linda Alvarado grew up as the only girl in a family of six children. She credits her knowledge of how to get someone into a full nelson wrestling move to her brothers. “It’s come in handy with my business negotiations,” she laughed as she spoke to almost 800 men and women in attendance for the Tampa Chamber’s Women of Influence annual luncheon, held today at the Hilton Tampa Downtown. Alvarado addressed the group as the keynote speaker.

She wove tales of her upbringing in a Hispanic household and how she was taught at an early age by her mother to “raise your hand” if she wanted the opportunity to do something. Once during a field day event at school in the fifth grade, Alvarado was denied the chance to participate in the long jump because no other girls had signed up for the event. When her mother heard, she took her daughter to the principal’s office and challenged his decision. Eventually, Alvarado did get to try the long jump and was relieved when she placed first.

Years of “not looking the part” hasn’t stopped Alvarado from becoming president and CEO of her own construction company and being the first Hispanic (male or female) to own a major league baseball franchise. She is an owner of the Colorado Rockies, based in Denver, Co. Alvarado has been the focus of many articles, business publications, books and magazines as her construction company has grown to multiple offices and her development projects have taken her across America and internationally.

Alvardo became interested in the construction business by chance. She was looking for part-time work while on an academic scholarship in college. Job openings included food service, the library or lawn maintenance. She figured she wasn’t a good cook, already spent too much time at the library so she applied for yard service. She met a lot of resistance hearing “girls do food service” but ultimately she got the job and it sparked an interest in construction as she wanted to make the curbs and sidewalks better.

Kathleen Bogolin, a profitability advocate traveled from The Villages to attend today's event. She said, Linda Alvarado's path to becoming CEO of a successful construction company was inspiring and her remarks were insightful, honest and entertaining. She joins the growing ranks of successful women, who serve as evidence that women can be very successful in every industry - including industries that continue to be male-dominated. One of the best parts of the day was looking around the room at so many smart, professional, talented women."

Taylor Lokey, Miss Tampa, was also in attendance at today’s luncheon and said she hopes that the “next generation of young Tampa women will see a difference the current generation is making and be inspired”.

Alvarado ended by encouraging women not get trapped by stereotypes and to be fearless in their pursuits saying, “there are no dumb questions.”

The luncheon also awarded Colleen Chappell the Dottie Berger MacKinnon Award for local women that exemplify values and leadership. Every year the Tampa Chamber selects a new winner during the Women of Influence luncheon. MacKinnon who passed away in 2013, was a Hillsborough County commissioner and a celebrated advocate for abused and neglected children. She was the founder of The Kid's Place which focuses on ensuring access to high-quality residential care for sibling groups entering foster care.

The WOI Committee will start working again in February to work on the 2019 event, which will feature Anne Geddes, world-renowned photographer, and philanthropist. Geddes is scheduled to speak on Thursday, April 18, 2019.

Melody Marrs of Goodwill-Suncoast has served on the committee for five years. She's found it to be a rewarding experience and says, "I enjoyed meeting so many different ladies who share the common goal of working in Tampa and wanting to become engaged in making our community a better place to live, work and play. So many different positions, industries, and career paths are represented that really gives those involved an opportunity to learn about the many companies that are in the community. It's cool to work together to help make Tampa a great community, participating in the informational and learning seminars, workshops and activities to both help the ladies grow personally and professionally, and share their talent with the community."

For more business news in Tampa, register with 813area, it's free!