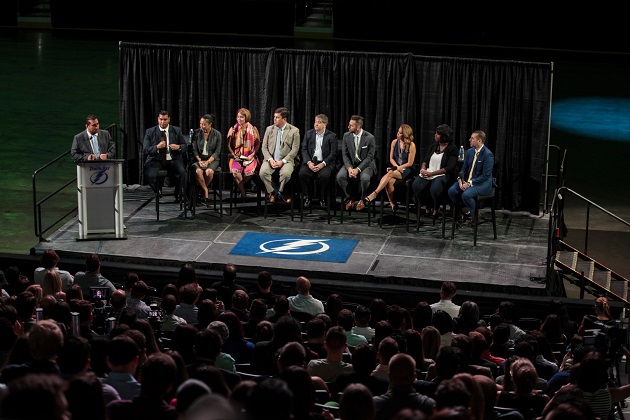 While the event was slated as a "Millennial" event, the 900+ people who gathered at  Amalie Arena on the evening of June 13 included community leaders and professionals from all generations.

The event featured a panel of community influencers and leaders who took the stage to share their stories and experiences about working, starting businesses, running for office, giving back, and helping develop the the direction of Tampa's growth.

In Amalie Arena, the building he owns, Vinik spoke about the things that drew him to Tampa. Vinik, who purchased 53 acres of downtown and has a $3 billion investment plan that will reinvent the Channelside district of Tampa, talked about the potential he sees in the city.

“This city, this area, in baseball terms is in the 2nd or 3rd inning of its growth. It’s got so much potential. It’s still young. People can have an impact here and really, have an effect on where we go as a community,” Vinik said.

Vinik expressed that he isn’t just focused real estate and residential development in downtown (although that growth alone is massive -- by 2027, Vinik said over 30,000 people will be living downtown versus the less than 10,000 people that currently live there). He is also focused on business development.

Vinik, in partnership with Dreamit and Bill Gates' Cascade Investments, is launching Urban Tech, a tech accelerator program which will bring ten companies to Tampa in the fall. If they are successful, they plan to expand and bring 40 companies the following year. Vinik would like to see that progress continue to compound in growth bringing more startups, talent, and business opportunities to the Tampa area.

Cesar Hernandez, head of Government Relations at HART, also talked about tech's influence on Tampa, particularly how it will impact transportation.

Hernandez traveled around the country to areas such as Silicon Valley to search for tech solutions to solve transportation problems in the Tampa area. His advocacy led to two new programs: Hyperlink, the world’s first private-public partnership that combines ride-sharing technology and public transportation, and a new public transportation corridor that will run autonomous, self-driving vehicles on a 2.7-mile stretch of downtown. Hyperlink, which utilizes Tesla Model X SUVs launched in April 2017, and the autonomous ride corridor is scheduled to launch later this year.

Technology and transportation were just two of the topics discussed the forum. Community involvement, media, professional development, and government were all discussed by the panel which also included:

The event was host by New Town Connections, a social club for young professionals who are looking to meet other like-minded people in their community and StandUp Tampa, a project of the Tampa Hillsborough EDC

To learn more about the conversations and themes that were discussed during the 1st Annual Millennial Impact Forum, check out our featured article on 83Degrees.