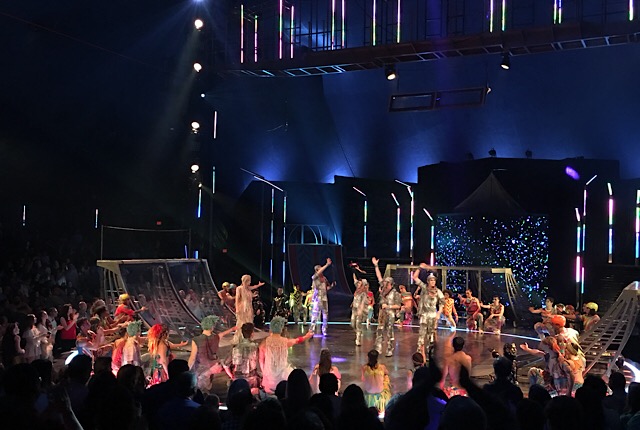 Cirque du Soleil's VOLTA, currently performing under the big top at the Tampa Greyhound Track, has something for experienced Cirque fans and newcomers alike in Tampa. The relentless energy and accessible story of VOLTA appeal to anyone seeing their first Cirque du Soleil performance while some new stunts and balancing acts mix up the action for longtime fans who might feel like they've seen this all before.

VOLTA is the story about a man named Waz born with feathery, blue hair. After a childhood filled with the taunts and jeers of his schoolmates, he channels his sadness into hosting a smash hit TV show called Quid Pro Quo, a cross between America’s Got Talent and The Hunger Games. Ordinary people called “Grays,” representing different areas of the country, compete on stage to show off their talents and become one of the “super elites” who achieve glory, albiet fleeting. On the show, Waz is a famous kingmaker, but, off the camera, he remains frustrated by a life spent hiding his true self. But with the help of a colorful, acrobatic group called “Freespirits,” Waz slowly comes out of his shell and seeks to be loved and admired on his own terms.

The crackling energy of VOLTA is truly visable, especially if you have seen Cirque du Soleil shows before. Often a Cirque show builds slowly to a peak, but VOLTA bursts out of the box and keeps up the momentum for most of the night. I’ve seen 15 different Cirque touring and theater shows, and only La Nouba, which recently closed at Orlando’s Disney Springs, could compare to the pace and excitement of VOLTA. As in every Cirque show, there are a couple of hilarious clown vignettes to serve as breaks in the action.

VOLTA is different from the usual Cirque show in other ways. While most of their touring shows are built around stories that don't seem to make sense, this one is relatable and easy to understand, and it even pokes fun at modern society. LED lights all over the stage, shiny metal equipment, and a video screen support the clean, futuristic feel of the show. In another departure from their usual routine, Cirque invited Anthony Gonzalez, the brainchild of French electro-pop band M83, to compose the music for VOLTA. It’s a welcome change propelling the show forward, even during the more delicate routines.

The stunts and performances at Cirque du Soleil shows are always breathtaking, but they can get a little predictable if you’ve seen enough of them. VOLTA breaks the mold by introducing feats borrowed from extreme sports. There are familiar acts like tumbling, jumping rope, and a high wire walking. You’ll also see acrobats balancing off ladder rungs and unicycles, a juggling baton-twirler, an exciting BMX bike trick finale, and even a woman stretching and balancing in midair while being held up by her hair!

VOLTA continues through Sunday, March 18 in the parking lot of the Tampa Greyhound Track, and tickets are available at cirquedusoleil.com. I’d recommend any Cirque du Soleil show to anyone, but if you’ve never experienced the thrill of a Cirque performance, VOLTA is a great place to get initiated.

Find more hot events in Tampa by registering on 813area, the ultimate guide to everything going on in the Tampa Bay area.

Photo surreptitiously taken by the author. No flash photography is allowed, and you’ll feel a little silly taking photos when you see the Grays walking around on stage, faces buried in their “devices” and brainlessly recording everything they see. 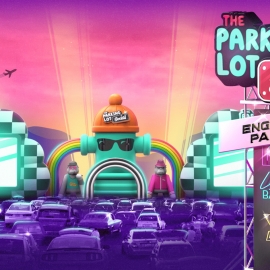