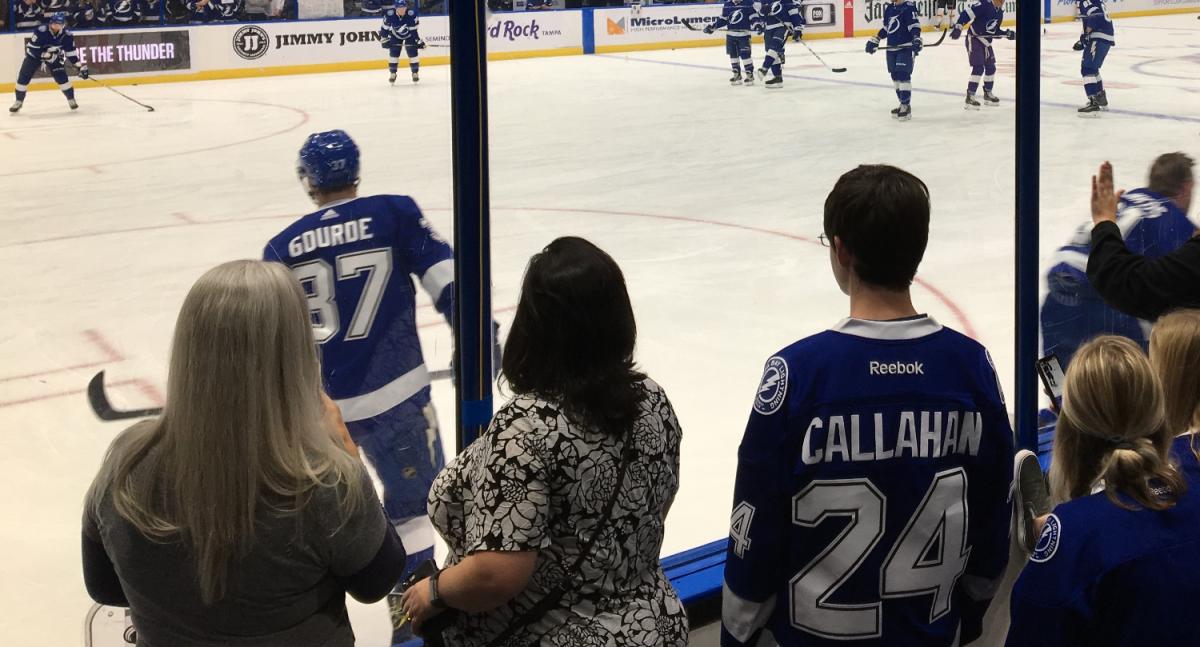 Please, watch this unbelievable save.

This piece is about the incredible performance Andrei Vasilevskiy put on against the Toronto Maple Leafs Thursday night, and you can find that piece below. It was about much more than this one save. But after writing it, and trying to describe the save, I have come to the conclusion that only videos can do it justice. Watch it again from this angle, and I’ll try my best to break it down.

It’s easy to say that he got lucky, flailing with his leg and randomly stopping the puck before it crossed the goal line. That, however, would be the work of a mere mortal, and it is becoming more and more evident that Vasilevskiy is a freak of nature, or dare I say not of this earth.

Watch the second clip again and pay attention to his head. He never stops tracking the puck, even after making the stop with his glove. He sees where that puck is, sees that is going to trickle over the line. His first instinct is to try and push it out with his left pad, but the momentum from pushing across to his left to make the initial save makes this impossible, as he is unable to get his skate behind the puck and sweep it out.

This is the part where every other goaltender in the world stops and the puck goes in. Vasilevskiy has not only the recognition, but the flexibility to swing his right leg towards his body towards the post and then away from his body and kick the puck off the line. Not only that, but he also has to be aware of where the puck is when he does this, making sure his pad is high enough so that he does not accidentally knock the puck in. All of that is incredible, but remember these clips are in slo mo. He had less than a second (I timed it) to calculate all that and use his body to execute it.

I have only been watching hockey for about ten years, on a large-scale for maybe six. This is the greatest save I have seen. There have been flashier saves, saves that are difficult to comprehend. Most of the time, incredible saves of this ilk have as much to do with the placement of the shot as they do with the positioning of a goaltender’s stick/glove/pad. It feels cheap calling them accidents, but that is what they typically are on the surface.

This save was 100% on purpose. The insane awareness Vasilevskiy shows tracking the puck, the instinct to resort to his other pad when realizing the first attempt was not going to work and the flexibility he has to swing his right leg in the manner that he did are all almost beyond comprehension. Add in the insanely small window of time he had to execute this save and it adds up to one of the greatest saves of the butterfly era. I’m only slightly exaggerating when I say this save broke my mind.

On to the article.

Andrei Vasilevskiy set a franchise record with 48 saves Thursday as the Tampa Bay Lightning held off the Toronto Maple Leafs, 4-1.

That margin of victory is one of the most misleading scorelines of the season, as the Leafs absolutely dominated play for most of the game, creating Grade-A chance after Grade-A chance. But time and time again, Vasilevskiy kept the puck out when called upon, often in spectacular fashion.

““He was the best player on the ice for us, by a country mile,” Lightning coach Jon Cooper said.

Vasilevskiy was a surprise start for the game. He was cleared for game action on Wednesday, marked by the sending down of goaltender Eddie Pasquale to the Syracuse Crunch. However, Louis Dominque was still expected to get the start; Vasilevskiy had not played in over a month and Toronto has one of the most potent offenses in the league. But Cooper confirmed after the morning skate that the Vezina finalist would indeed get his 14th start of the season.

His night got off to a rough start, allowing a goal to Leafs forward Kasperi Kapanen at the 5:26 mark of the first period, just Toronto’s third shot on goal. It is harsh to blame Vasilevskiy on the play: Kapanen picked off a Nikita Kucherov pass at the top of the right circle and skated in alone of the Bolts goaltender, snapping a shot past Vasilevskiy’s glove. Still, it was not a good start for a goaltender looking to capture the rhythm of the game after sitting for four weeks.

“The first period was the hardest one, the first couple of shots, especially that one (Kapanen’s goal),” Vasilevskiy said. “After that I felt pretty good.”

“Pretty good” is an understatement and a half, as Vasilevskiy immediately found his groove and stopped the next 46 shots he faced. Of those 46, 15 came while killing penalties, which the Lightning were required to do on six occasions. He also faced an insane 21 high danger chances (meaning shots that came in and around the crease) during the game, stopping all but the Kapanen goal.

He also had several goalmouth scrambles, sprawling out and doing everything he can to keep loose pucks out of the net. A key moment came a moment after Anthony Cirelli’s short-handed goal tied the game at one midway through the first period. Still on the power play, the Leafs worked the puck down low and created an initial scramble. The puck came loose to Nazem Kadri, who chipped the puck over Vasilevskiy and off the crossbar. He turns, staying with the puck, only to twist around again when the puck landed in the middle of the blue paint. Before Kadri could react Vasilevskiy lunged with his glove to sweep it away and eventually cover, stopping Toronto from immediately retaking the lead and preserving the momentum for his team.

Not four minutes later Vasilevskiy made another incredible save, robbing Auston Matthews on a backdoor feed and kicking his pads against the momentum of his body to cover up the rebound. He would be called upon once more before the first intermission, doing a painfully perfect split to keep his left pad on the near post, beating a deke from John Tavares and stoning him on the backhand attempt.

“He was unbelievable, he definitely didn’t miss a beat,” Cirelli said. “He made a lot of key saves for us in big moments to give us a little boost on the bench and help us win this game.”

The Maple Leafs turned it on in the second, amassing 23 shots on goal and three power plays, but Vasilevskiy was equal to every challenge they posed, making several tough glove saves look routine. He held Toronto at bay and the Bolts were able to take a commanding 4-1 lead after goals from Nikita Kucherov, Alex Killorn and Tyler Johnson, the last two coming in the final minute of the period.

“Killing off those penalties was really big,” Ryan Callahan said. “(They had) couple good chances, Vasy was unbelievable on the penalty kill.

“Then to grab two like that, it deflates the other team and lifts us up.”

Despite the three goal advantage, the Maple Leafs always looked capable of tying the game and Vasilevskiy had to stay sharp in stopping 16 shots during the final frame. His best save came about two minutes into the period, making a tough save on Patrick Marleau and clearing the loose puck off the goal line with his skate (see above to relive that glorious moment).

In the regular season, all 82 games matter, but it was clear from the opening faceoff that this game had a bit more at stake. It was two of the top teams in the league, arguably the two best forward groups, going toe-to-toe for the first time this season. Toronto was most definitely the better team on this occasion, outshooting the Lightning 49-21 and creating enough chances to score a dozen goals. When these two teams play again, next on January 17th in Tampa, the Lightning will want to significantly up their game and balance out the scoring chances. But it is comforting to know that if they do not, they can call upon their star netminder to shut the door.

“He was our backbone tonight, he played unbelievable,” Callahan said. “It’s good to have him back and he showed tonight why he’s a world class goaltender.”