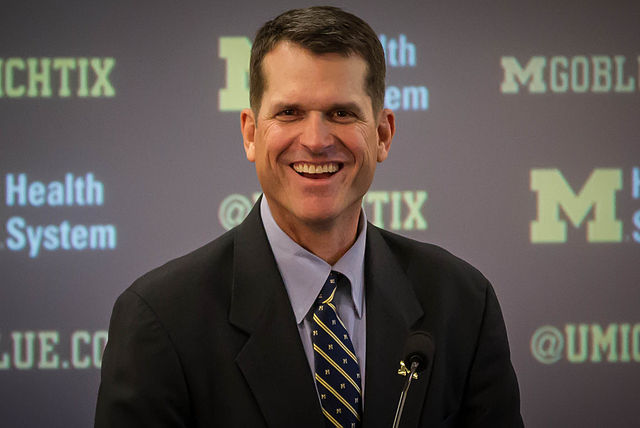 Jim Harbaugh, the quirky, intense, khaki-wearing, steak-eating, milk-drinking coach of the Michigan Wolverines, talked about several things during his 26-minute session with members of the local media at Raymond James Stadium during the 2018 Outback Bowl contract signing on Thursday.

Harbaugh mentioned a desire to expand the college football playoff field to 16 teams. Then he spoke on his love of social media ("I think there are good things about it. It's funny. There are things that are very humorous. And as I found out, it's a good way to bring clarity if there's an untruth that's been painted or something.") and his very good friend Willie Taggart's decision to take the Florida State coaching job ("I'm just so proud of him and the tremendous job he's done everywhere he's gone. It's an opportunity for him to come home and that's a special thing.")

However, when Tampa Bay Times columnist Martin Fennelly started asking the Michigan football coach about his future coaching plans, and whether they included a return to the NFL, Harbaugh became elusive and even a little combative. First he decided to go after the media in a joking tone.

Fennelly, however, continued his questioning and got quickly cut off when asked if he wanted to talk about it.

"No, not really. Like I said, you're like a Realtor, just stirring the pot," Harbaugh said. "I'm not falling into it."

Eventually Fennelly asked if that meant Harbaugh wasn't interested in returning to coach in the NFL, and that's when the conversation got a little uncomfortable.

Harbaugh doesn’t want to talk about it. Fine, but we can speculate all we want. Let's be honest, the Tampa Bay Buccaneers are going nowhere fast. They are staring at a sixth losing season in the past seven years, and it's fair to question if head coach Dirk Koetter is the guy to lead the Bucs out of this purgatory. Jim Harbaugh is a lot of a things, but he's not a loser. He has an 86-37 record in college, and he compiled a 44-19 record in four years as head coach of the San Francisco 49ers, with three NFC Championship appearances in a row. He's one of four coaches, along with Jimmy Johnson, Barry Switzer, and Pete Carroll, who’s been the head coach in the Orange Bowl and the Super Bowl.

Is he the right guy for the Bucs? Hard to say. Would he return to the NFL? He isn't saying he will.

But he isn't saying he won't, either. Maybe the Bucs should get some answers of their own.

Looking for some more Sports in Tampa or Things To Do In Tampa? Subscribe to 813area... it’s free! You’ll also get the best resource for Events, Restaurants and more.