Gasparilla History | What is Gasparilla & Why Do We Celebrate? 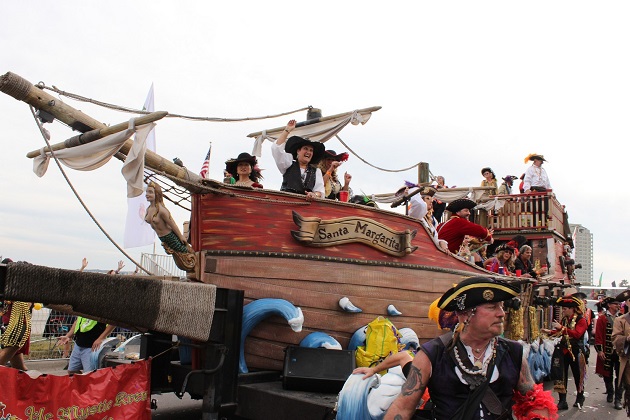 If you've lived in Tampa for a while, you know the Gasparilla Pirate Festival and all the events surrounding it make for one of the biggest annual celebrations in the Tampa Bay Area.  Every January, this Downtown Tampa event brings people from Tampa and beyond together for an unforgettable pirate-themed celebration featuring a huge parade, live music, kid-friendly festivities, and much more.  But, how it all started seems like kind of a mystery to many of us.  So, why exactly do we celebrate Gasparilla?  For this, we've got to examine Gasparilla's history.

The history of Gasparilla starts with the name. The name Gasparilla was born from Jose Gaspar, a pirate who terrorized the coastal waters of West Florida during the late 18th and early 19th centuries. Fond of calling himself "Gasparilla", Gaspar and his band of pirates lived a life of seizing and robbing merchant ships off the Gulf Coast until 1821.

Ready to divide their riches and finally disband to lives of luxury, Gaspar and his crew decided to seize one last ship before calling it a day.  Unbeknownst to them, this ship was a United States Navy warship in disguise.  A bloody battle ensued before the U.S. Navy ship crew reigned victoriously and finally ended the long, thieving career of the legendary Jose Gaspar.

The story of the often-mysterious Gaspar circulated around the Tampa area.  In 1904, city officials and civic leaders decided to finally celebrate this victory over evil by adopting Gaspar as the patron rogue of this new, city-wide celebration.  But, the history of Gasparilla doesn't end there.

Secret meetings led to the development of the first Gasparilla krewe, "Ye Mystic Krewe of Gasparilla", which would make Gasparilla history by surprising Tampa residents with a mock pirate attack on the city that is now known as the Pirate Invasion today.

RELATED CONTENT: Your Complete Guide to Gasparilla Season in Tampa

The Pirate Invasion was much different back then.  In Gasparilla's first few years the invasion was composed of masked krewe members on horseback instead of the classic pirate ship we see today.

The mock invasion was so successful that city officials decided to turn Gasparilla into the huge, annual event we know it as now.

Today's pirate invasion involves the world's only fully-rigged pirate ship, manned by Ye Mystic Krewe of Gasparilla, which creeps into the bay at the beginning of the festival to "attack" Tampa Bay.  A number of pleasure crafts intent on defending the city from Gaspar's mock pirate ship make their way out to the pirate before realizing they're in way over their heads and joining the ship in an all-out invasion.  They all dock at the Tampa Convention Center to meet the mayor who's only choice is to surrender the key to the city to this massive pirate crew.

With key in hand, the pirate krewe takes over the city with the celebratory Gasparilla Festival and Knight Parade we all enjoy today.

So now you know;  this is why we celebrate Gasparilla.

Pretty cool, huh?  The Gasparilla Pirate Invasion and Festival goes down on Saturday, January 29th, and begins at 1 p.m.

Make your plans now. There are a ton of ways to experience Gasparilla and they're all great.  We'll see you out there, Tampa Bay!

For more things to do in Tampa, check back with 813area, we're your free guide to the city.