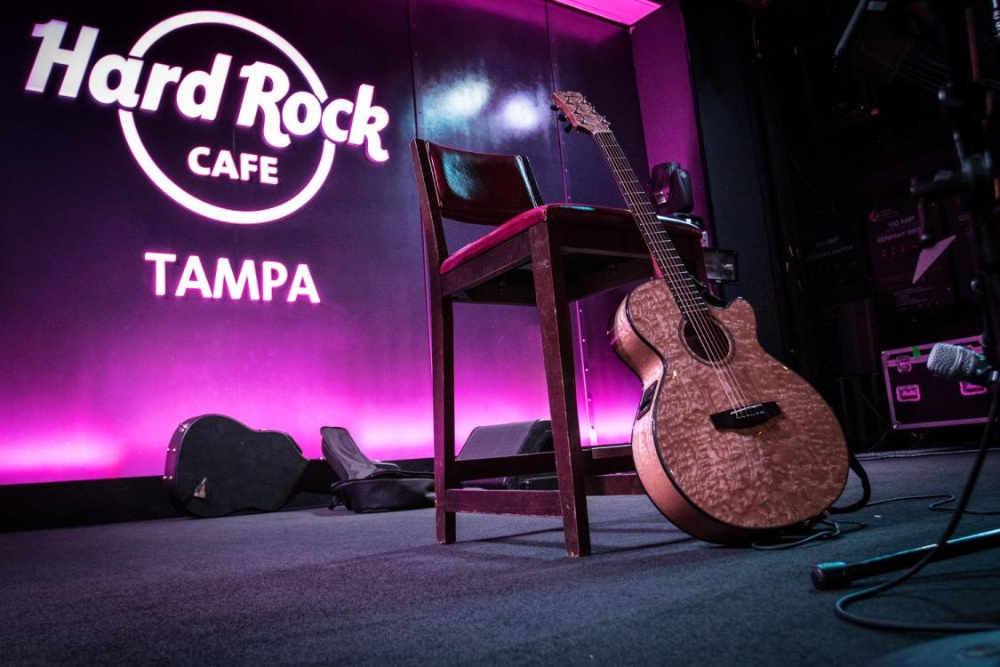 The Tampa Bay Acoustic Music Festival at the Hard Rock Cafe continued Friday night with a fantastic lineup of acoustic performances from Jonny Seagz, Ingyou Kim, Jessica Rose, The Real Clash, and C'Nergy.  It's incredible how much musical talent is hiding in Tampa Bay just waiting to be found!

Kicking off the night was Jonny Seagz. Jonny recently relocated to the Tampa Bay area from chilly Rhode Island.  Jonny started singing at age 5, playing piano at 6 and taught himself to play the guitar at 18.  His true love, however, is songwriting which he started at 21.  Jonny isn't a stranger to the big stage. He made it to the first round of auditions on America’s Got Talent, the first round on The Voice, and the second round on The X Factor. 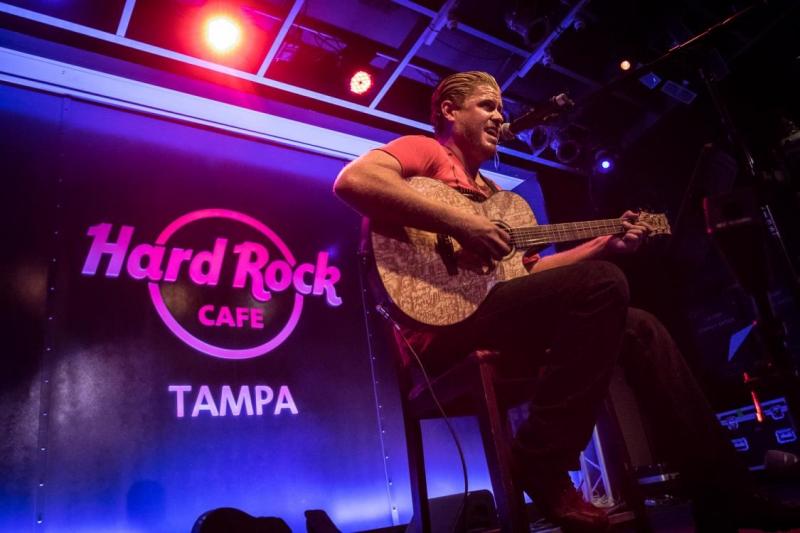 Even though he didn't make it all the way, one thing is certain, Jonny can sing! He belted out a set of mostly original, heartfelt songs including “The Other Side” a song about appreciating the life we have and not taking any day for granted, “Days We Discovered” about being young and dumb and falling in love and “Be With You” a love song about meeting a partner and wanting to take it around the world. I especially liked the lyric “take my hand, we’ll dance around the world”. Cover songs included “Where Are You Going” by Dave Matthews, “Free Falling” by Tom Petty and “Yellow Led Better” by Pearl Jam.  Jonny is just getting started in the area but is "ready to take the Tampa  by storm!"  Track Jonny's storm here. 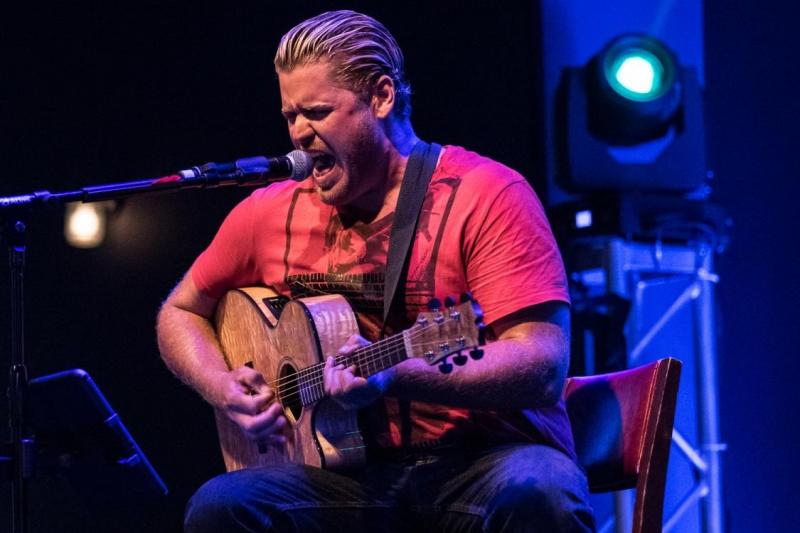 Next up was Ingyou Kim. Ingyou started taking classical guitar lessons when he was 5 until he was 10 years old.  He picked it back up when he was 12 and taught himself to play radio music by watching YouTube videos. He started singing at church and got really serious when he joined a 15 member chorus group during his senior year of high school.  He recently graduated from USF and is still very active playing there. 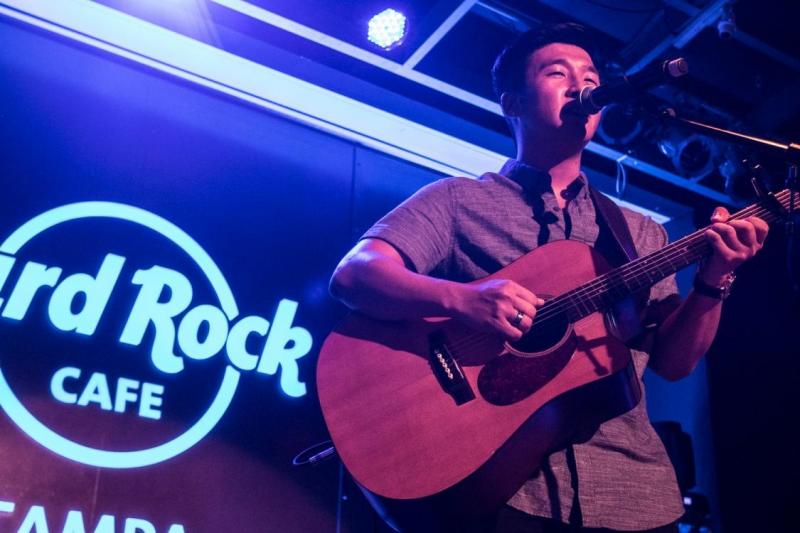 He is passionate about music because music changes people, it changes their mood and brings people together.  Ingyou showed his passion during his set of covers including "Free Falling" by Tom Petty, "Stay with You" by John Legend, "Say" by John Mayer, and "Better Together" by Jack Johnson.  Ingyou hopes to release an album in the future. Until then, keep up with him here. 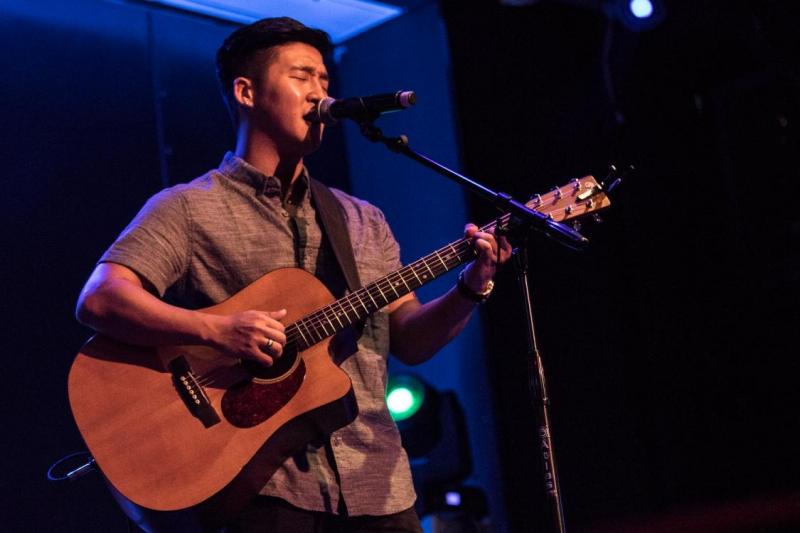 Jessica Rose took the stage next and wowed the crowd with her sultry sound.  Jessica comes from a musical family, has been "singing as long as she can remember" and taught herself to play the guitar at 14.  During a drama class in high school she was asked to "show her talent" so she wrote a song and has been writing ever since.  Out of all of her talents though, she enjoys singing the most. 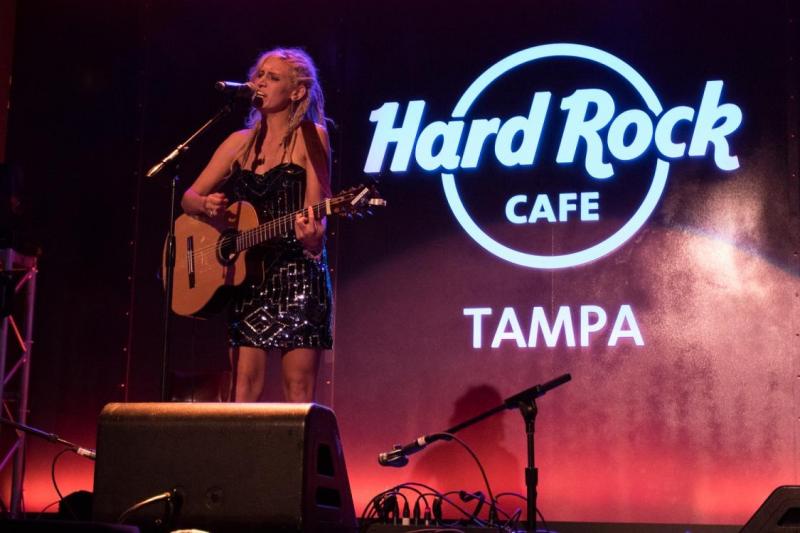 And sing she did! Jessica played a set of mostly original music including "Safe at Home" a song about her first apartment, encouraging her friends to be "safe at home" with her instead of drinking and driving, "Spilled Milk" a funny song about her inability to cook and not crying over the little things like spilled milk, and "Sparkly Eyes" a very personal, moving song about her best friend who recently passed away and the beach they used to love to go to together.  She's unsure why it had to happen but she sings "hold my hand together, we don't have to understand". Beautiful. 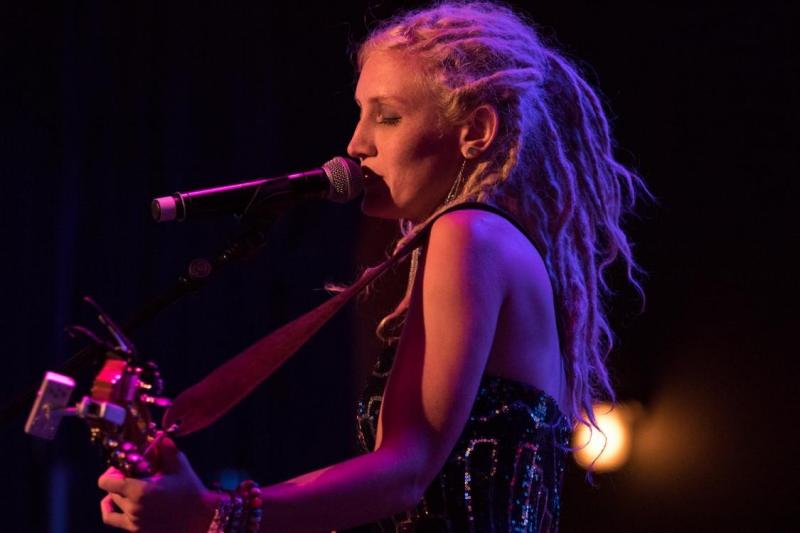 Jessica is passionate about performing and networking with other artists. She plays solo shows at various venues around Tampa Bay and hosts her own open mic every Tuesday night at Beach Fyre at Clearwater Beach.  She is currently making a music video which she plans to release this summer.  Jessica donates 50% of sales from her songs on ReverbNation.com to Every Mother Counts. Jessica chose this charity because "Moms are awesome, need to be treated with respect and they deserve it". Rock on with Jessica here. 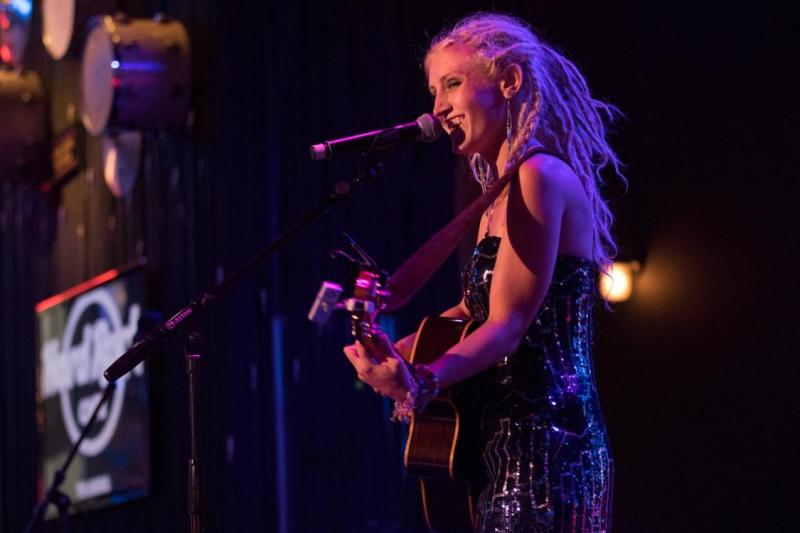 I don't think anyone was truly prepared for The Real Clash!  All seven, yes seven, members stomed the stage and took over the Hard Rock Cafe for a show like no other. Band members Rashad "Shadcore" Harrell - MC, Jay "The Acolyte" Wilson - MC, Eliana "VOXX" Blanchard - Vocals, Andrew "AR-15" Roden - Guitar, Jordan "JWALK" Walker - Keyboard, Isaac "I-SICK" Reidt - Bass, and Travis "BIG T" Young - Drums, met three years ago while enrolled in the Music Industry Recording Arts program at St. Petersburg College (SPC). At the time, SPC didn't have a hip-hop curriculum and the band members talked the school into allowing them to start one.  It was a pilot program at first but was so successful it was added to the curriculum and the band has kept it going ever since. 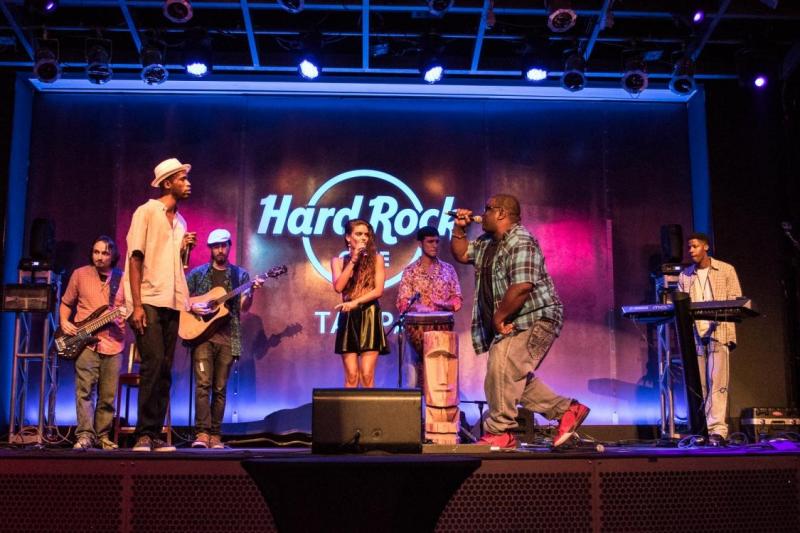 The Real Clash "redefines" hip-hop by mixing together various forms of modern rock with half time shuffles, old school funk, soul, R&B, jazz, and pop for a big ole' gumbo of booty shakin, hand clappin, get off your feet fun!  Songwriting is a collaborative effort and The Real Clash performed a set of all original songs.  They all have the capability to write and feed off of each other to create their unique sound. 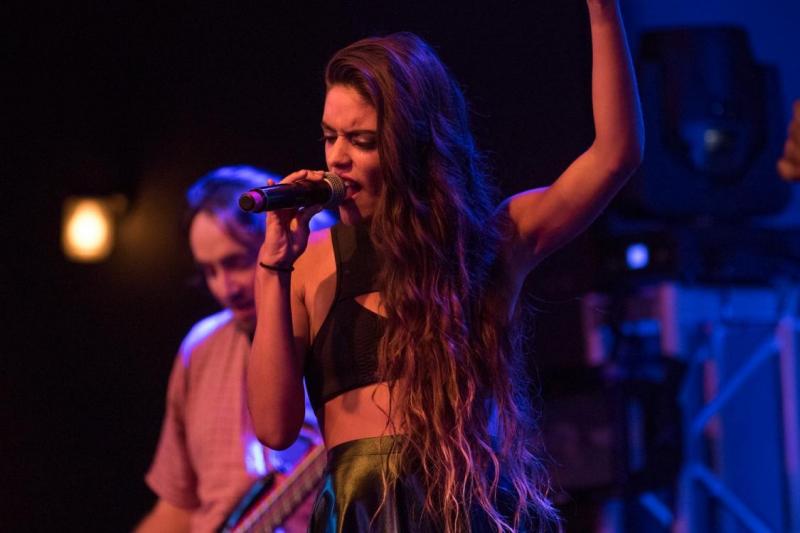 Songs included "Boxxcutta", a song about being happy being yourself and cutting yourself out of the box people are trying to put you in, "Embrace", a song inspired by the 2013 Typhoon in the Philippines, and my favorite song "Effigy" a song about another way The Real Clash is redefining hip-hop, contrary to popular belief hip-hop doesn't always involve drinking, drugs, and violence. Hip-Hop with The Real Clash is about honesty, great music, and shaking your egg like this! No doubt, The Real Clash knows how to put on a show and everyone in the Hard Rock Cafe was dancing and singing to the "redefined" hip-hop. 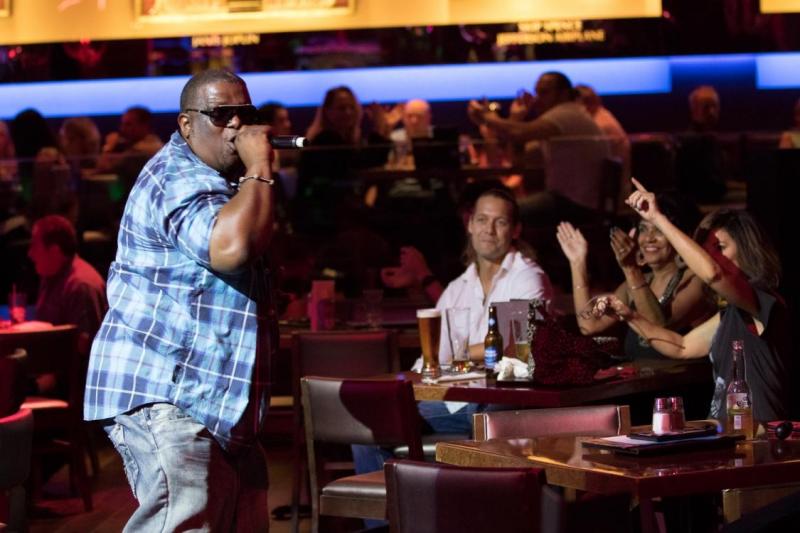 All along the way, The Real Clash has been a grassroots effort.  They just finished wrapping up the recording of their debut album, CLASH WEDNESDAY. It's 95% ready to be relased but they need that last little bit of cash to complete it. If you're able to donate-a-dollar to help "redefine hip-hop" and release their album, please click here.   For a great time, see The Real Clash July 11th at The Amsterdam in St. Petersburg or keep it real with them here. 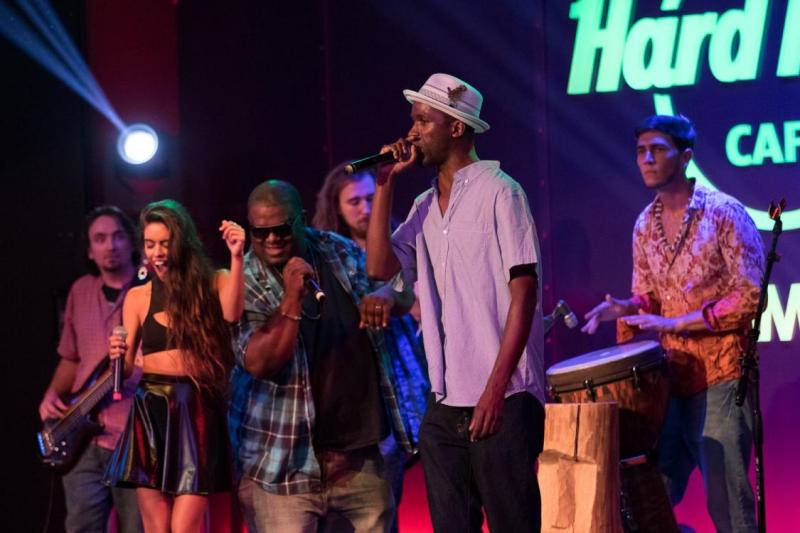 Closing out the night was C'Nergy.  C'Nergy is a group of very talented musicians who have been performing together for 5 years. Composed of Stacy and Andrew on vocals, Caleb on Sax, Marcus on Cajon, Lisandro on Keyboard, and Rafael on Bass and Guitar, they performed a mix of R&B, Pop, and Soft Rock tunes. 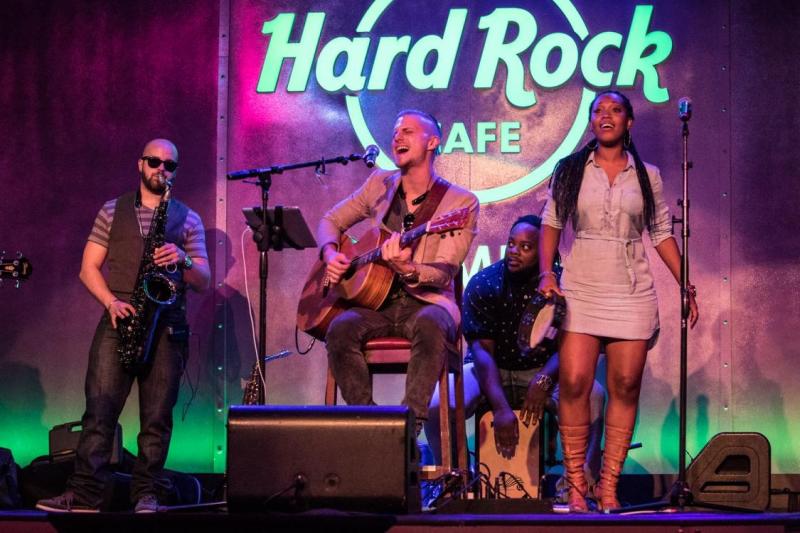 Songs included "All of Me" by John Legend, "Hit Me With Your Best Shot" by Pat Benatar, "Drunk in Love" by Beyonce, and "Rock with You" by Michael Jackson.  C'Nergy is performing at the Blue Martini in Orlando on June 25th.  Until then, get all your C'Nergy here. 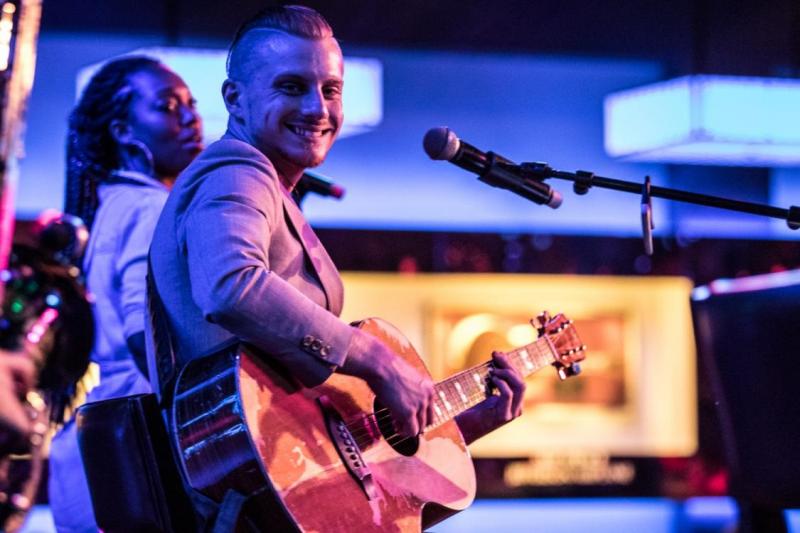 The Tampa Bay Acoustic Music Festival at the Hard Rock Cafe continues all weekend and throughout the month of June with a fantastic lineup of local bands. Check out the schedule here and head to the Seminole Hard Rock Hotel & Casino Tampa to hear some of the best local live acoustic music around!