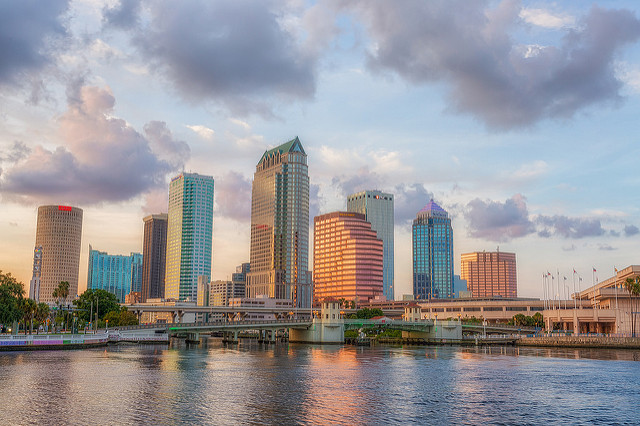 If you're into sporting events or one of a kind parties, then keep reading! We have eight of the best events in Tampa this weekend, one Localite feature, and three ways to explore and discover your favorite city! No matter what you choose to do with your time off this weekend, enjoy it!  Here are a few things to do in Tampa to get you started.

That’s So Fetch Party @ The Ritz

"Gretchen… stop trying to make fetch happen. It’s not 2004 anymore, so it's not going to happen!" If you're at The Ritz Ybor on Saturday, November 10, however, then fetch is definitely finally at the That's So Fetch Party in Tampa this weekend! Put on your custom cut Ed Hardy tank tops and your most glittery bedazzled denim for a night to celebrate the early 2000s on Saturday night in Ybor City! In addition to throwback styles, you can expect to jam out all night to classic hits from Avril Lavigne, Britney Spears, and more as VJ Sirius will be playing your favorite 2000s throwbacks to get your up on your feet!

By Entering Your Mobile Number, you will be Entered to WIN 2 Tickets to That's So Fetch! 2000s Party @ The RITZ in Ybor Watch For Future Exclusive 'Text Only' Specials

Remember the game Red Light/Green Light? Club Prana in Ybor makes mingling a little easier and a lot more fun Friday night with their Stop Light Party! The "rules" are simple: dress in the color that indicates your relationship status. If you’re attending as "single and ready to mingle," wear GREEN! If your status is complicated, show up curiously cute in YELLOW! If you're in a relationship, sport fierce and fiery RED to tease all the on-lookers and let them know you're taken. Get in on the game and grab your ticket to the Stop Light Party at Club Prana before it sells out!

Put on your favorite jersey and catch the Tampa Bay Lightning play the New York Islanders at Amalie Arena this Friday Night! If you don’t have tickets to the game, head to Ferg’s Live or Hattricks to watch the game, eat some bar bites and drink some beers as you watch with like-minded fans! When I’m looking to watch a game, I head to Hattricks for their shake n bake style wings.. BBQ is my favorite flavor! As always, GO BOLTS!!

Remember Jack-Ass and all the stupidity that went along with it? One of Jack-Asses craziest and most well-known actors, Steve-O is headed to the Improv Club in Tampa this Friday Night! You can be sure to see more stupidity, like the idiotic things he’s doing in this video below during his stand-up show this weekend!

Attention, foodies of Tampa: @ThisBabeEats is celebrating our love of food and taking pictures of it (we all know that phones eat first) with an Instagram Food Tour of our favorite city on Saturday, November 10! This will be one tour you and your taste buds won't want to miss as popular food blogger Kiera Andrews has hand-picked some of the city's best eats for you to try including bites from Brew Bus Brewing, Nebraska Mini Mart, Taco Dirty, Soho Juice, Empamamas inside Armature Works, and Bake 'N Babes inside the Hall on Franklin.

The Tampa Bay Buccaneers play the Washington Redskins this Sunday at 1 p.m. inside  Raymond James Stadium! Because the two teams are neck and neck come out and show support for the Bucs on Sunday to up their chances to win! Or make it a Sunday Funday and head to World of Beer or Miller’s Ale House to catch the game with fellow Bucs fans!

Shop till you drop this Saturday during the Fall Market Hop in Ybor City and Channelside! The streets of Ybor City will be flooded with art, crafts, food and locally made items as three markets take place in the area on that day! The Ybor City Saturday Market, Ybor Chamber Market and Picker Place Vintage Market will takeover the streets around 7th Ave from 10am-6pm this weekend. The Maven Market in Channelside will take place from 12-6pm on Saturday. Shop smart and wear walking shoes because there are thousands of vendors to check out!

It’s basketball season again! That means the Women’s Basketball Team at USF has begun their reign over the sports fans at USF! This badass collection of women is one of USF’s best sports teams and their fans make it known. They play University at Albany this Friday night inside the Yuengleng Center on USF’s campus. Put on your best green and gold to cheer loud and proud for your alma mater!

One event worth checking this weekend is Tampa Greek Festival. There will be something for everyone at this event which has been going on for more than 30 years. Aside from a menu of Greek food favorites for dining in at St. John The Baptist Greek Orthodox Church's Grand Hall or take-out, there will be an Opa! Party Tent and there will be traditional and contemporary Greek music and dancing all weekend long! Also, there will be a Greek Market and a Kids Zone. This is definitely an event you don't want to miss!

Spend some time amongst the animals at ZooTampa at Lawry Park, Busch Gardens or the Florida Aquarium!

Check out all of the new improvements and animals they have at ZooTampa! Get your hands in the action and touch a stingray, see the African Elephants or a Baby Hippo!

If your kids can never make up their mind between the Zoo and an amusement park, they don’t have to! Head to Busch Gardens to get the best of both worlds this weekend and get closer to a tiger than ever before!

Spend some time under the sea this weekend at the Florida Aquarium in Channelside! This is one of the coolest and largest Aquariums I’ve ever been to with thousands of sea creatures for the kids to learn about!

If you're looking for a full list of events going on in Tampa this weekend, check out 813area, your local guide to your favorite city!