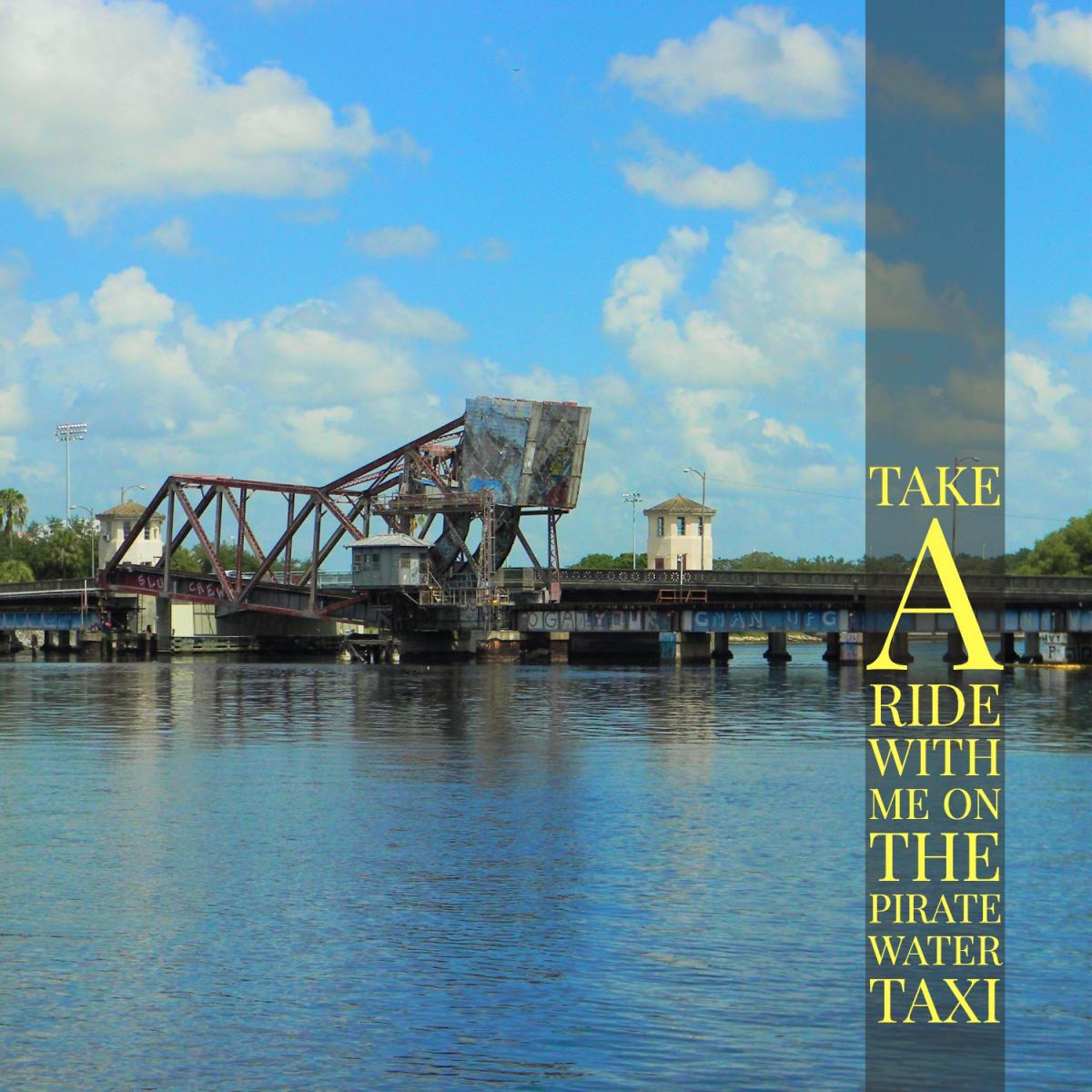 The Porsche of Performance on the water, the Ferrari of Function on the river, Tampa's new Pirate Water Taxi is the epitome of everything we value in a luxury vehicle. Pirate Water Taxis are blowing the competition out of the water through both performance and function as they continue to fire on all cylinders. The brainchild of the good people at Yacht StarShip, Pirate Water Taxis are the only 'ships' cleverly designed to look like a taxi cab and are revving up Tampa's waterfront with a great new service.

Wanting to learn more about these adorable vessels I decided to mosey up the river for a bit while checking out their 'Narrated Tour'. My journey began and ended on the dock at the Tampa Bay History Center. Along the way I learned much about the service, people and purpose behind Pirate Water Taxi as Captain Ron and First Mate Sam ferried me up the river on my virgin run to Rick's on the River and back again. Come take a ride with me, sit back and relax as I share the sights, sounds and fun that is Pirate Water Taxi! 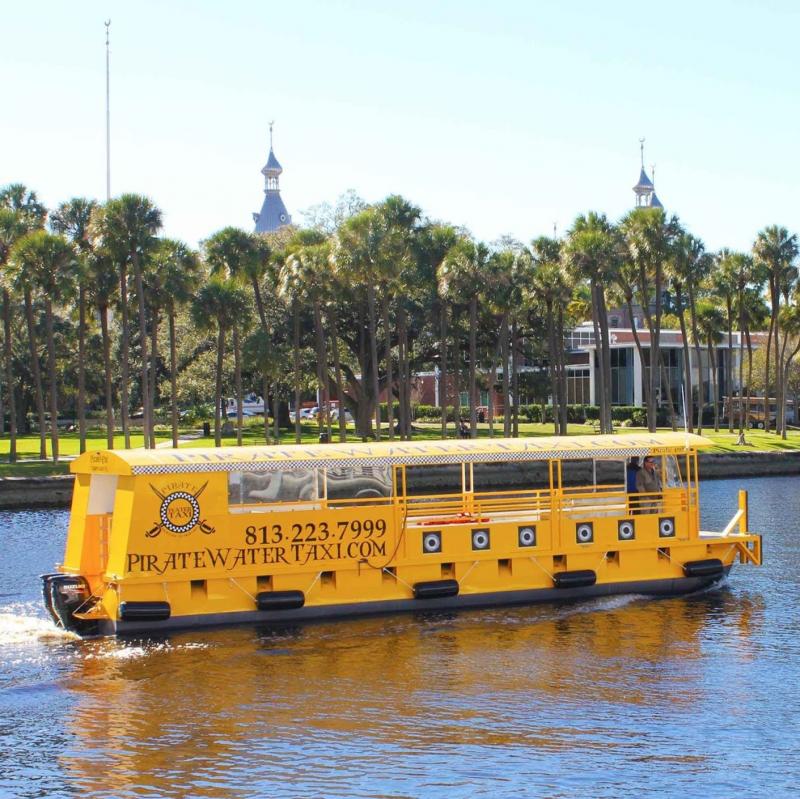 As I stood at the Tampa Bay History Center dock I saw my 'cab' heading East in the Garrison Channel.  As it moved closer I recognized First Mate Sam immediately by his infectious smile, we'd spoken before on the very same dock, this time however, I was taking the ride. (To hail a Pirate Water Taxi all you need to do is stand on the dock, it's easy!)  Politely stepping down to the dock Sam positioned portable steps, offering me a hand up as he gently guided me onto the deck.  My riverboat captain that day was Ron, a kind and thoughtful man who made it clear how much he truly cares about the services a Pirate Water Taxi provides and the company he represents. 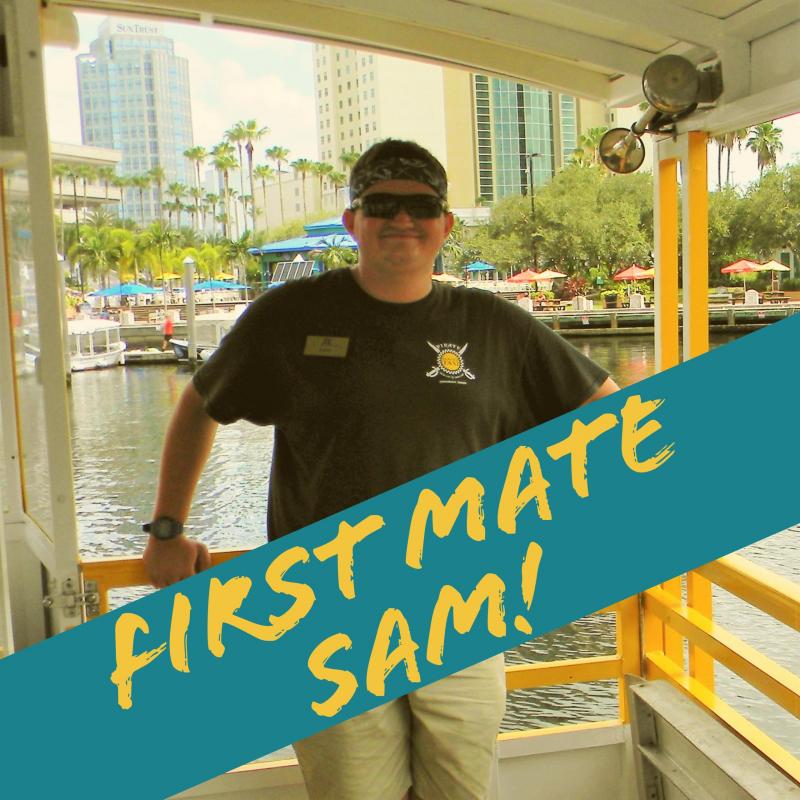 Pulling away from the dock I admired the cleanliness of the Water Taxi, and realized for the first time how BIG it is, seriously, my first thought was, PARTY*, but more about that later.  The sun was out, puffy white clouds dotted the skyline and it was hot, brutally hot.  I was grateful for the full canopy of the Taxi, it shielded me from the sun and heat.  As we pulled away from the dock into the channel I closed my eyes, turned my face into the breeze, and as it caressed my face thought, "No wonder Sam smiles so easily!  Damn, what a great job these boys have!"  I would have loved to pass the time quietly meditating as the dock slipped slowly from view, but I had an interview to do, so I snapped myself back in gear and set about answering the question, "What makes the Pirate Water Taxis hum?"The words performance and function kept popping into mind as we idled past the iconic Tampa Marriott Waterside Hotel & Marina and Jackson's Bistro on Harbor Island. It was the performance of the captain and crew, the cleanliness and spaciousness of the boat, the humorous narrative shared during the guided tour, and the commitment of each person I met along the way who made my experience a positive one. This unusual and fun means of transport is needed in Downtown Tampa, and a step in the right direction towards a 'walkable city'. 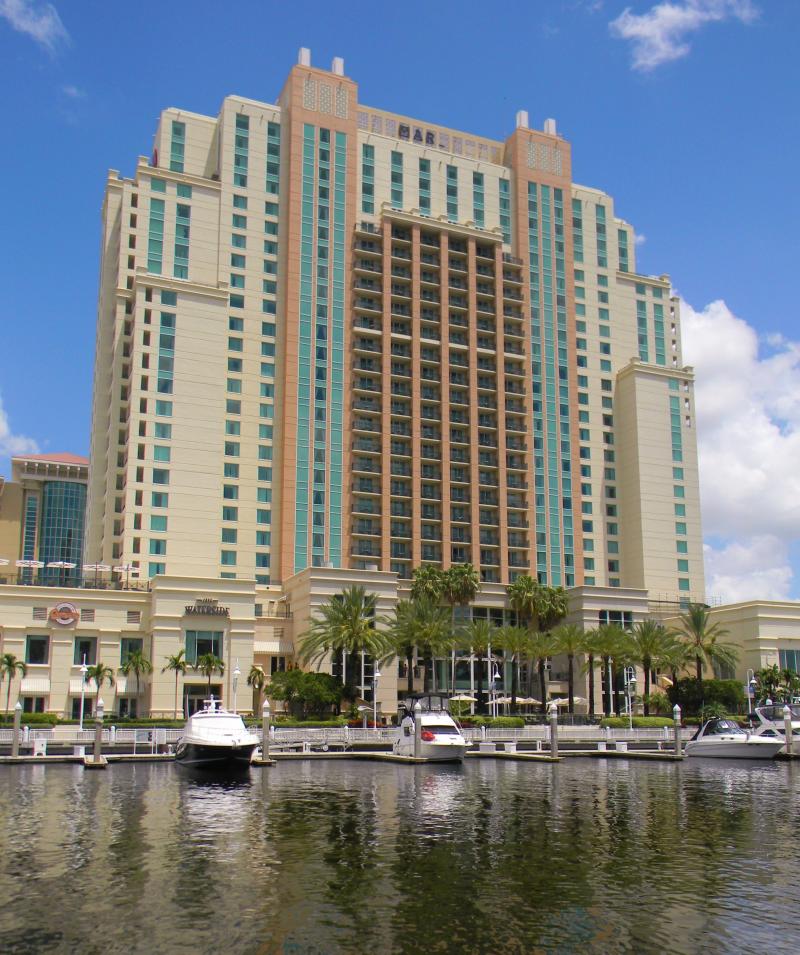 My camera clicked furiously as Captain Ron expertly docked us into one of over 13 Pirate Water Taxi stops, this one at The Sail Pavilion at the Tampa Convention Center where a new word cropped up, "Impressed".  Sincerely impressed by their commitment to comfort the dock looked much like the party deck in my back yard, there was a cover, chairs, benches and places to enjoy company. It looked inviting, I could easily picture friends sipping drinks, telling stories and having fun on the dock as they waited to taxi up to Ulele for oysters and craft beer or to Rick's on the River for catfish.  In a recent interview with Jeff Houck at Ulele, Jeff shared the restaurant's love for the Pirate Water Taxi service. Explaining how Pirate phones Ulele to make reservations for diners, he called the Pirate Water Taxis, "a valuable asset to Ulele."

Underway again we cruised past the tip of Davis Island, under the Brorein Bridge, and past News Channel 8 where we had an interesting discussion about 'Crew Graffiti'. As my taxi danced across the water we came upon the Kennedy Boulevard bridge where I learned something new.  Did you know President Kennedy came to Tampa to thank the city for naming the street after him?  After his motorcade crossed the bridge he was taken to TIA where the President then flew to Dallas, making Tampa the last successful motorcade of President John F. Kennedy. I love knowing things about Tampa and places I travel; I've lived in Tampa Bay for 40+ years yet learned much from First Mate Sam as we ambled along. 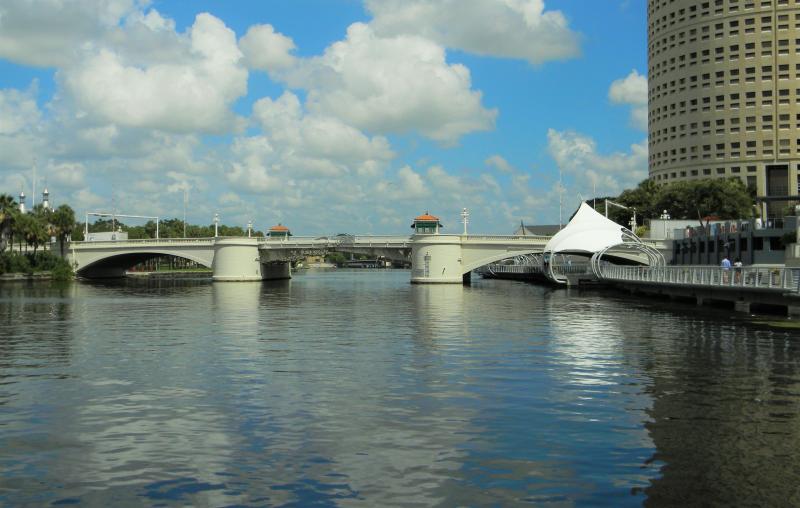 Enjoying my perspective aboard "Captain Jack", and the history being shared by Sam, I listened as we rolled past Kiley Gardens, Curtis Hixon Waterfront Park , Plant Park and the University of Tampa. I watched a family enjoying a picnic and a couple riding bikes along the Riverwalk, a young girl tossing a ball to her puppy, people dining on the terrace at Straz Center for Performing Arts and a couple cuddling on the Tampa Museum of Art lawn.   Little things but each one screamed community to me. As I thought about how far we have come as a city we came upon my favorite bridge, the Cass Street Railroad Bridge. One of very few rolling lift bridges left in Florida, the original was built in the 1880’s by Henry Plant to carry passengers and supply filled trains across the river.  CSX owns it now and to my delight workmen were present as we motored past! 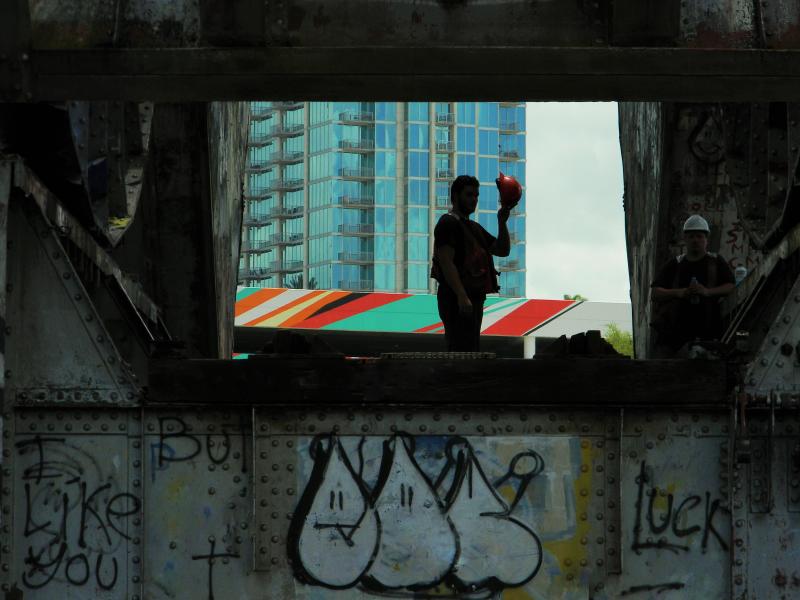 Crossing under the Interstate, where if you enjoy public art you are in for a treat, my soul suddenly leaped at the next sight.  As someone who appreciates reclamation, rebirth and seeing something beautiful arise from nothing, WaterWorks Park is a visual testimony to what we can do as a community.  Seeing the beauty and serenity of this natural resource was great, but to hear the unbridled laughter of children enjoying the park and to have a precious little boy gently wave as our boat drifted through his day was awesome!

Here’s to freedom, cheers to art. Here’s to having an excellent adventure and may the stopping never start.”
― Jason Mraz 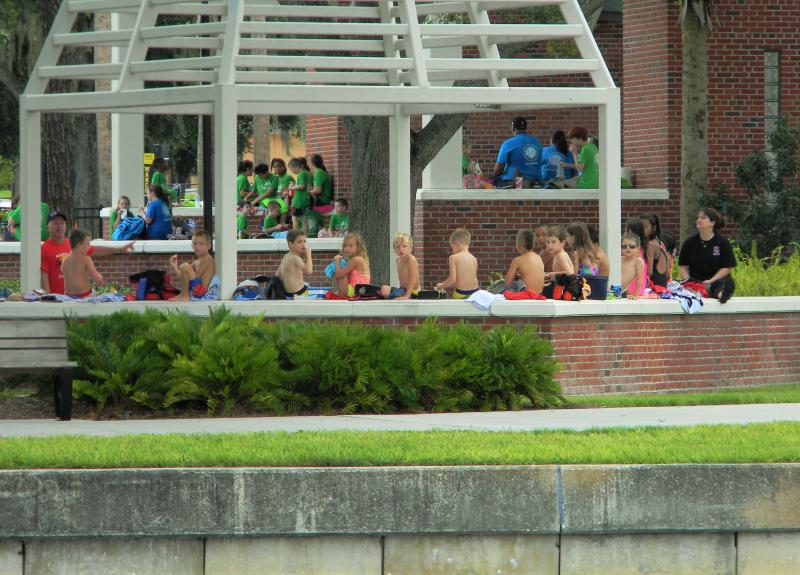 Moving past Ulele and several beautiful homes to Rick's on the River, Captain Ron pointed out the new Pirate Water Taxi Dock at Rick’s. Known to locals as the 'West Tampa Yacht Club', this popular destination is a ‘Call Stop’ for the Taxi. You call, they come, the other call stop for Pirate Water Taxi is the dock at Marjorie Park on Davis Islands. After shooting a few pictures at Rick's Captain Ron turned us around and we headed south. Passengers waiting at the Ulele dock had driven in from Weeki Wachee for the day to dine at Ulele and take the narrated Pirate Water Taxi river tour. Inexpensive, an all day Hop-On-Hop-Off pass is only $15 for the day (adult) and $10 after 6 pm, 7 days a week.  Once aboard you have unlimited access to 17 Attractions and Museums, 24 restaurants and 13 Parks along Tampa’s waterfront. (The narrated tours happens only during the day.) 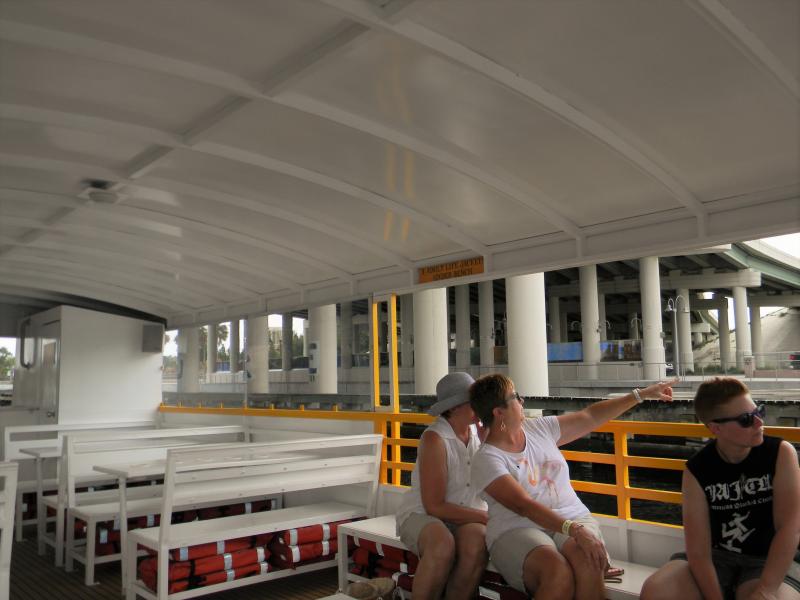 I found peace on sun kissed water, floating past trees overhanging the shore, marveling at the city skyline as we passed under bridges new and old, admiring homes and parks and schools and museums and theaters dotting the banks. Springs and inlets flow into the riverway providing food and habitat for birds, we even saw a dolphin in the brackish water. The sights are burned into my memory, from the infamous Jose Gaspar, to grand towers shadowing Bayshore Boulevard, to tourists on Water Bikes smiling and waving as we shared the river for a brief moment.  I can't wait to do it again, next time with a friend. 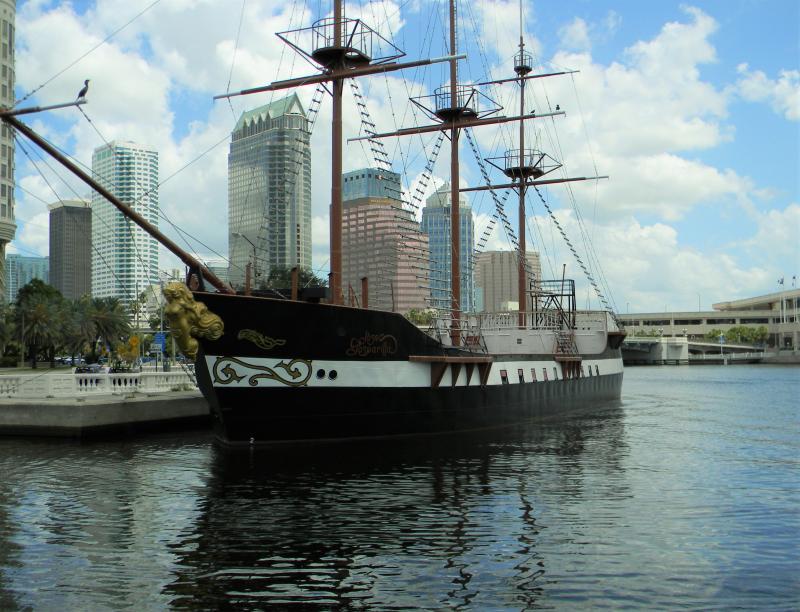 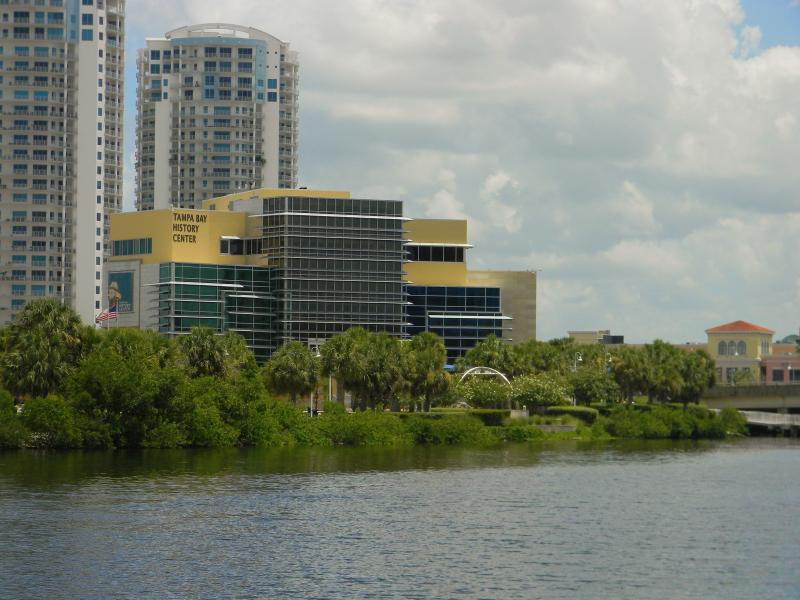 The  Tampa Bay History Center as we cruised back to port.