Check Out The Best Events In Tampa During Gasparilla Season

While other cities say goodbye to the holidays with sadness, Tampa says hello to Gasparilla Season! Kicking off the 2019 Parade Season with the Gasparilla Children's Extravaganza in January, and ending with the Rough Riders St Patrick's Night Parade in March, there's plenty to do in the city. But there's more going on this time of year than just parades and parties. When you're not at hanging out on the parade route, here's a quick list of other events around Gasparilla in Tampa to get you in the spirit!

On February 22nd and 23rd, Downtown Tampa will experience another type of invasion with thousands of runners and their proud cheerleaders taking over South Tampa and Downtown. Pick from a 15K, 5K, 5K Stroller Roll and a 5K walk, half marathon or and 8K. No matter if you are an experienced runner, a novice, or a happy spectator, this is a fun Tampa tradition everyone can attend. Registration is open now!

Formally known as Latin Fiesta, Tampa's Annual Fiesta Day is a fun street festival celebrating the Cuban, African Cuban, German, Italian, Jewish, and Spanish immigrants who came to Ybor City in the late 1800's. These immigrants settled in Ybor as the Cuban cigar factories thrived so stop by Ybor City and visit The Italian Club or some Latin food that is unique to Tampa! 7th Avenue will be closed off to traffic and turned into a pedestrian-friendly street party with entertainment, arts and crafts, and of course, traditional Latin cuisine. This year's event will also take place on February 22nd in the heart of Ybor City, so after you run your 5K at the Gasparilla Distance Classic that morning, you can reward yourself with a Spanish pastry or glass of Italian wine in the afternoon!

Gasparilla Festival of the Arts

Always scheduled for the first weekend of March, this event does not disappoint. As one of the largest outdoor art festivals in the southeast, the Gasparilla Festival of the Arts showcases local and national artists from around the country. Whether you're looking for a new statement piece for your home, or just there to enjoy the art and the food trucks, this is a fun, family-friendly event that everyone can appreciate. This event is also very dog-friendly so you can also bring your small dog (under 25 lbs) and take him or her to the downtown dog park behind the Tampa Museum of Art after you're done browsing and eating.

The 2018 Gasparilla Music Festival is one of Tampa Bay's signature entertainment events and is quickly becoming one of the top music festivals in the state. GMF will again take place in Curtis Hixon Waterfront Park on March 7th and 8th, hosting bands and musical acts from a wide variety of genres. Phase 1 of the lineup has been announced and Phase 2 will be coming shortly! Be on the look out! It will also make cuisine from Tampa's top restaurants available for festival goers including Malio's Prime Steakhouse, The Refinery, Ella's American Folk Art Cafe and many more. You can feel good about supporting this event because GMF is also a not-for-profit, with its mission to support and promote music and education. The GMF is involved throughout the year in several initiatives including providing scholarships and instruments to music students. There are also a select number of VIP tickets available so make sure to grab your tickets early before they sell out!

If you love movies, this is the event for you! From March 17th to 22nd, Tampa Bay will be invaded by actors and filmmakers. The Gasparilla International Film Festival (GIFF) is a unique signature event in Tampa. By showcasing local and regional films and featuring panels and roundtables with actors and directors, GIFF increases the visibility of the film industry in Tampa and highlights the economic impact this industry has on our region. Throughout the week, you'll have the opportunity to attend exclusive screenings and rub elbows with stars, producers, and directors, all while supporting your city! What's not to love about that?

Overall, Parade Season in Tampa Bay has some pretty cool events going on other than just the Gasparilla Parades. We love living here and these events will help you celebrate our city's past, present, and future. And remember there are fun things going on in Tampa every weekend!  It's what makes us unique and one of the most fun cities in the U.S.A.!

Be sure to keep up with all those events and live music around, check here at 813area. And be sure to register, it's free!

Photo from 813area at the Gasparilla Music Festival 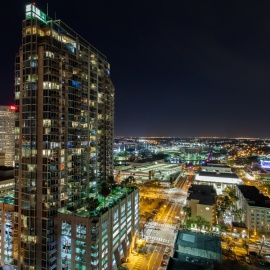